This is first time in Test Cricket history, two last wickets has seen put on century partnerships. England started day 4 trailing by 105 with just one wicket remaining. Joe Root and James Anderson stretched their partnership to 198, a Test record for the 10th wicket. Jimmy Anderson who made his first Test Fifty was on full form with Joe Root on a three-figure score before he went after a full and wide ball from Bhuvneshwar Kumar and edged it to the wicketkeeper MS Dhoni. This was Bhuvneshwar Kumar fifth wicket, but it came too much later than he may have expected after he had taken England’s eighth and ninth wickets yesterday evening. Root, who had hardly put a foot wrong since walking in early in yesterday’s middle session, was unbeaten on 154.

In the first inning Bhuvneshwar Kumar and Muhammad Shami faced 229 balls and beaten all expectations with a stand of 111 runs, the second-highest partnership for the 10th wicket by any Indian pair., the most by a final-wicket pair in England and the only instance when a 10th wicket pair had played more than 200 balls at Trent Bridge. They hold India’s record for the most balls faced by the final-wicket pair and are fourth-highest overall. It was the second time the last two batsmen have added more than 100 run at Nottingham. In terms of balls played, the last three 10th wicket partnerships at Trent Bridge have been the three longest at this ground. Even in terms of runs scored, the last two Tests at this ground have now seen the two best 10th wicket stands. Bhuvneshwar Kumar and Muhammad Shami recorded the 3rd instance of Indian batsmen from no.9 or below scoring half-centuries. 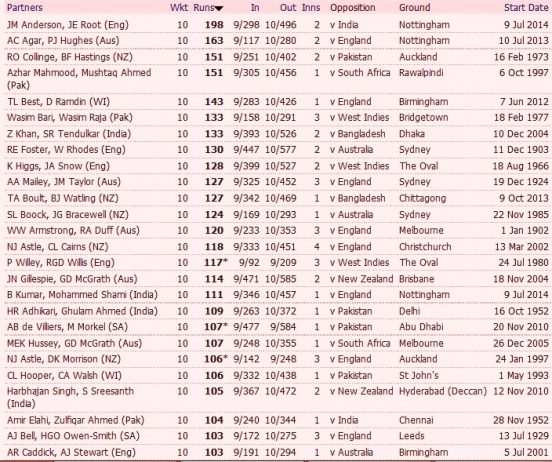 James Anderson Shines in the Modern Era of No 11

James Anderson a well composed 81 runs, aside as the highest score by an English No.11 and the third-highest by any in that position. Jimmy Anderson faced 130 balls actually second-most by an English No.11. His partnership with Joe Root produced 198 runs, a world record for the tenth-wicket. They were together for 360 balls, the most by a tenth-wicket pair in Tests, and the only instance of a last wicket pair playing 300 or more deliveries. Moreover; the tenth-wicket pairs from both sides accumulated 309 runs, the most runs scored for the final wicket in a Test.

In a rare occurrence, the only other No.11 batsman to score a Test fifty for England is John Snow. He scored an unbeaten 59 against West Indies at The Oval in 1966. John Snow and Ken Higgs shared a final-wicket stand of 128. Jimmy Anderson maiden half-century was only the 2nd instance of a No.11 batsman reaching the mark against India. Wes Hall had made an unbeaten 50 at Port of Spain in 1962. Wes Hall then also took the first five wickets, reducing India to 30/5.