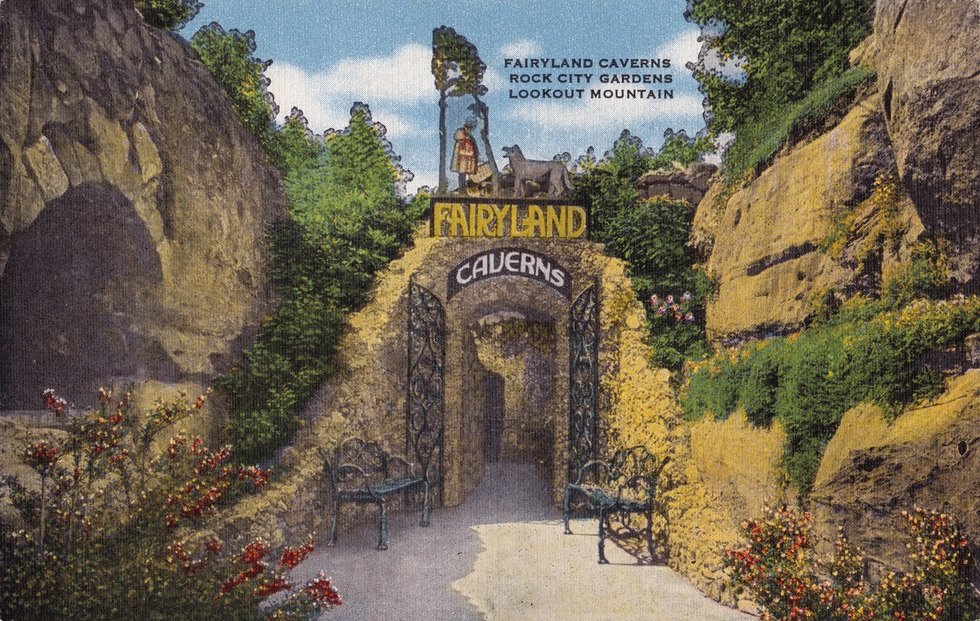 Fairyland Caverns is high outcropping atop on the east face of Lookout Mountain in Walker County, Georgia. Fairyland Caverns is located at 1400 Patten Road in Rock City is open for 8:30 am. to sunset. Rock City is 1,700 feet above sea level. Rock City named as people believe the rocks on top of Lookout Mountain Looked like city building and natural pathways seem city streets. The ancient Rock City formation wander through sedate woodland paths zigzag through the fourteen acres of majestic greenery. The geographic authenticity of Rock City is more like a fun hike with a lot of meandering and a ton of surprises.

The beautiful trail carries you through Goblin’s Underpass, almost under the one-thousand-ton balanced rock to a one-hundred-foot waterfall. It cascades down the mountain to the popular Lover’s Leap and Swing-A-Long Suspension Bridge spanning about 200 feet. The trail is “sort of” in a cave, because Fairyland Caverns is between two large rocks, pressed so close together that they appear to make an underground trail.

Huge swings are carved from logs with a lot of fun to explore all the meandering paths and discover strange new things around every corner. Albino deer! Gnomes on a swing! The fairyland cavern with thousands of pieces of coral thoroughly glued to the ceiling! The Rainbow Hall, a short walkway with seven windows that had been covered in the colored film so that you could walk through the soft light.

On a sunny day, standing on Seven States Flag Court, you can view the Tennessee, Kentucky, Virginia, North Carolina, South Carolina, Georgia and Alabama in the distance. Also, you can see solitary red-capped gnome which sits on the brink of a mountain boulder (like Rodin’s ‘Thinker’ statue) looks down into the valley.
Advertisement

Eventually, you will find yourself at the tunnel entrance to Fairyland Caverns. As you walk through a long series of cave-like galleries, elves and gnomes are perched on trapezes and simulated rock shelves. A beautiful Gnomes Castle, the Carnival of Gnomes brewing moonshine in a still.

At the end of Cavern, you can enjoy the Mother Goose Village, Little Boy Blue, Humpty Dumpty, Little Miss Muffit and Cow that jumped over the Moon. Moreover, Rock City introduced an audio tour and return of the gnomes in the new Gnome Valley installation. Also, a mascot is a white-bearded gnome, appears on advertising brochures in a form of person in a Rocky Costume welcomes the tourist in the park. The educational show about birds of prey, rescued birds unfit for re-release found new careers as ambassadors to Rock City visitors.

In 1924, a real estate developer Garnet Carter called the neighborhood Fairyland due to his Wife, (Frieda) love with European Folklore. This awe-inspiring citadel evolved into a nationally recognized tourist attraction, developed the natural marvel into the Rock City Gardens.  Garnet named the streets after fairytale characters. Garnet Carter was the inventor of miniature golf, owned the Tom Thumb golf franchise.

It’s a weird and whimsical combination of beautiful nature and goofy added touches. Frieda planted 400 species of trees, flowers, shrubs amidst the big stone bounders near the Fairyland housing development. Hence, in 1932, Frieda’ graceful garden was opened for the public to observe the natural wonders of the mountains. The garden was dotted with beautiful imported German gnomes.

In 1947, Carter wife decided to start drilling through the rock to create the cave for Fairyland Caverns.  Thus, the narrow man-cave has black-light-sensitive 3-D dioramas of gnomes and fairy tale scenes every 10 feet or so. In 1964, the Mother Goose Village completed with various nursery rhymes. Which situated in the center of a dark room the size of the small auditorium toward the end of Fairyland Caverns.

To entice the visitors to Rock City Gardens. Carter came with the idea to paint the message “SEE ROCK CITY” on barns and birdhouse. The idea worked all over from Michigan to Texas to Florida. The iconic “SEE ROCK CITY” billboards painted on barns across the south might be the most famous series of billboards ever. Garnet was passed in 1954 and Frieda in 1964 after that ownership of the Rock City attraction has remained in the family.