Facts of Great Tri-State Tornado of 1925

The storm that spawned the Great Tri-State and several other tornadoes on March 18, 1925, was from a northeast Pacific storm. The depression was over western Montana on March 16. On the morning of the 18th, it was over northwestern Arkansas and was moving to the northeast at about 40 miles per hour.

It was over southern Illinois during the early afternoon and southeastern Indiana by 8 p.m. The United States Weather Bureau described 7 distinct tornadoes in Alabama, Tennessee, Kentucky, Indiana, Missouri, and Illinois generated by the storm.

Thomas P. Grazulis, in Significant Tornadoes: 1680-1991 (1993), describes the same 7 but adds an earlier one in Kansas and a later one in Kentucky on that date. All but the Kansas tornado were killers. Fortunately, the death toll was 4 or less for all but 2 of these tornadoes.

One tornado started in Summer County, Tennessee, and traveled 60 miles to Metcalfe County, Kentucky, killing 39 and injuring 95. It was of F4 force and had a path width of about 400 yards. The Great Tri-State Tornado caused 689 deaths—741 deaths for the total storm, with the death toll for the other 6 tornadoes at 13, with 164 injuries.

It was especially devastating as it traveled on the ground along a ridge of mineral resources and parallel to a railroad. Thus, several mining and railroad towns were in its path.

Missouri. The tornado first touched down north of Ellington in southeast Missouri about 1 p.m. It traveled northeast to damage Leadanna, a mining town.

It continued northeast to engulf Annapolis, two miles north of Leanna. Annapolis was devastated, with 90 percent of the town destroyed and 2 dead. All but 7 of the 400 structures in Leadanna and Annapolis were badly damaged. Hence, the damage total was about $500,000 in the two towns.

Fortunately, one schoolhouse that held 300 students was undamaged. The damage in and near Annapolis was three miles wide. Survivors remember that the sky became dark, and something like a smoky fog swept through the town. A funnel cloud was not seen.

The next damage occurred in and near the small towns of Lixville, Biehle, Frohna, and Altenburg. At least 32 children were injured in two county schools in Bollinger county. Deaths occurred in Biehle and Altenburg, 30 miles north of Cape Girardeau.

In Biehle, there were 4 dead and 11 injured out of 100 villagers. For three miles near Biehle, there was evidence and sightings of two parallel funnel clouds, which reunited later before passing into Illinois. A child was killed in a wooden schoolhouse 5 miles north of Altenburg. The toll in Missouri was 11 to 14 dead, 63 injured, and $564,000 in damage (in 1925 dollars).

Illinois. The damage in Illinois was much worse. In Gorham, it had been dark and gloomy; the drizzle increased to pouring down a flood, then the air was filled with flying debris. The town of 500 was virtually wiped out. There were 34 deaths, and over half of the town’s population was killed or injured.

Seven of the deaths occurred at the school. Communications were cut off such that although the tornado struck at 2:35 p.m. no aid came until 8 p.m. There was not even a healthy doctor present until aid arrived. The doctor in town was giving an injection when the tornado hit; the patient was killed, and the doctor received a broken collarbone.
Advertisement

Murphysboro, population 11,000, was next to be decimated. The 234 deaths were the largest number in one city in U.S. history at the time. About 800 were injured and $10 million was incurred in damage. Three schools, built of brick or stone with little reinforcement, were caved in, crushing at least 25 people.

The tornado affected 152 city blocks 72 percent of the residential section and 60 percent of the city. About 1,200 homes were damaged or destroyed, leaving 8,000 people, or two-thirds of the city, homeless. Fires ravaged the destroyed area and 70 more blocks in a residential district, demolishing homes still standing and burning victims caught under collapsed buildings. Fires could be far as 60 miles away.

The tornado had destroyed the water plant, as well as many of the hydrants. A “rigged” system restored water pressure to fight the fires. Other casualties of the tornado were the 2,000 jobs lost due to the destruction of the Mobile and Ohio Railroad shop, Brown’s Shoe Company, the Isco-Bautz silica plant, and other industries.

Businesses sustained almost $1 million in damage but had only $122,000 in insurance. The next town hit was DeSoto, a hamlet of 600, where 33 were killed at one school, setting the record for school deaths in a tornado. A total of 69 were killed in or around DeSoto. The town itself was obliterated. Only a dozen houses were left standing, none left undamaged.

An outbreak of fires caused more damage to the ravaged town. The hamlet of Bush was next in the storm’s path; there, the tornado left 7 dead and 37 injured. It also left only one building standing in Hurst, a town of 200. The rural area between DeSoto and West Frankfort suffered 24 deaths.

Even the Illinois The central railroad bridge on the Zeigler branch was shifted by 6 feet. One of the rescue jobs after the tornado was to clean the debris off farmland so that planting could be done within the next few weeks. Between West Frankfort and Orient was a small school attended by Mavis Flota.

It was a warm day, but late in the afternoon, it became so dark that the students could not read by lamplight. The clouds became streaked with lightning, and thunder boomed. A roar like the sound of a train told the teacher that there was a tornado coming.

It tore off one room, spilling Flota onto the ground and into the golf-ball-size hail. When she stood, she was picked up by the storm and carried 2 miles, landing scratched and bruised but otherwise unhurt, except for the soles of her new shoes being pulled off.

The tornado cut across the northwest part of West Frankfort, the largest town in its path, with 20,000 people. This part of town was composed mostly of small residences, many of the miners’ homes. Sixty-four blocks of houses were damaged in the 0.25-mile-wide path and 13 blocks were wiped out.

They had to climb out a narrow escarpment and then face the damage and injuries caused by the tornado; many of the dead and wounded were women and children. A small community, called Eighteen because it was near Number 18 Mine, was devastated.

Nearby Parrish contained about 40 buildings, but only 3 were left after the tornado. Although the population was only 300, there were 46 deaths and 100 injured. There, the tornado was preceded by thunder and a violent succession of lightning flashes, and the funnel cloud was seen by Parrish inhabitants.

It struck Parrish at 3:15 p.m. Hailstones the size of apples came after the tornado. Parrish never rebuilt, existing only as a few older homes. In the forty-five minutes required for the tornado to travel through Gorham to Parrish, 541 people were killed. Leaving Parrish, the path of the tornado went through rural areas in Hamilton and White Counties before reaching Carmi, near the Indiana border.

The destruction and death in the rural areas was unprecedented, as many farms were destroyed, and 65 people were killed. At least three different White County schools claimed deaths from the tornado. It was estimated that 1,500 farms needed debris cleaned off the land so that they could be planted.

Indiana. The town of Carmi had 2 deaths and the border town of Crossville reported 1 before the tornado crossed into Indiana. In Illinois, the tornado caused 606 deaths, about 1,600 injuries, and $13 million in damage. Just beyond the Wabash River was the small town of Griffin.

The tornado did not leave a habitable structure out of the 150 homes in Griffin. Two children on a bus were killed; the total death toll there was 34, with 200 injured out of 375 inhabitants. Identifying victims was difficult, as the mud was embedded in their skin. Fires occurred in the ruins and added to the destruction and agony.

Leaving Griffin, the path of the tornado, 0.75-mile wide, veered north by 9 degrees. The new path would include Owensville and Princeton. At Owensville, 17 deaths occurred, including three generations of one family. In this rural area, 85 farms were destroyed.

Princeton, the county seat of Gibson County, was caught, like most other towns, unaware. A blackness moved over the south side of town, killing 45 and injuring 152 and causing $1.8 million in damage. One-fourth to one-half of the town was in the devastated area, so after 200 homes were destroyed and 100 were damaged, 1,500 people were left homeless.

The two largest industries, the $2 million Southern Railway shops and the H. T. Heinz factory, were demolished, as was the village of workers’ homes nearby. Fortunately, only 3 people lost their lives in the industries (2 at Southern, 1 at Heinz). Luckily, the Princeton school had let out about twenty minutes earlier, and the children were out of the tornado’s path; the school was caved in.

An estimated 100,000 people visited Princeton to view the damage. The deadly tornado finally lost it’s steam and lifted near Petersburg, 16 miles northeast of Princeton, about 4:30 p.m. East of Princeton, irregular-shaped chunks of ice as large as goose eggs were reported to fall.

In Indiana, the tornado had appeared as three funnels for part of its path. Many people described it as a turbulent, boiling mass filled with debris. It often looked like a big black mass, like a thunderstorm. The tornado had killed 30 people in Indiana injured 354 and caused $2,775,000 in damage.

The intensity did not vary as much with this tornado as with others; it simply destroyed everything in its way. Its path was wide, varying from 0.25 mile to 1 mile, with much of the path 0.75 miles in width. It traveled an exact heading of 69 degrees northeast for 183 of the 219 miles.

The killer moved so quickly that many were not able to seek shelter. Country residents indicated that only about five minutes passed after noticing the cloud before the tornado struck. However, shelter in the form of basements, which are usually places of safety, were deathtraps to several people.

In some cases, the tornado caved the house into the basement, and the wood or coal stove then set the ruins on fire, burning the trapped survivors. Nine people were found around a stove in a Griffin restaurant. Read More – The Massive Earthquake of Pakistan 2005 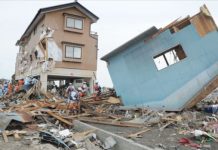 The Massive Earthquake of Pakistan 2005