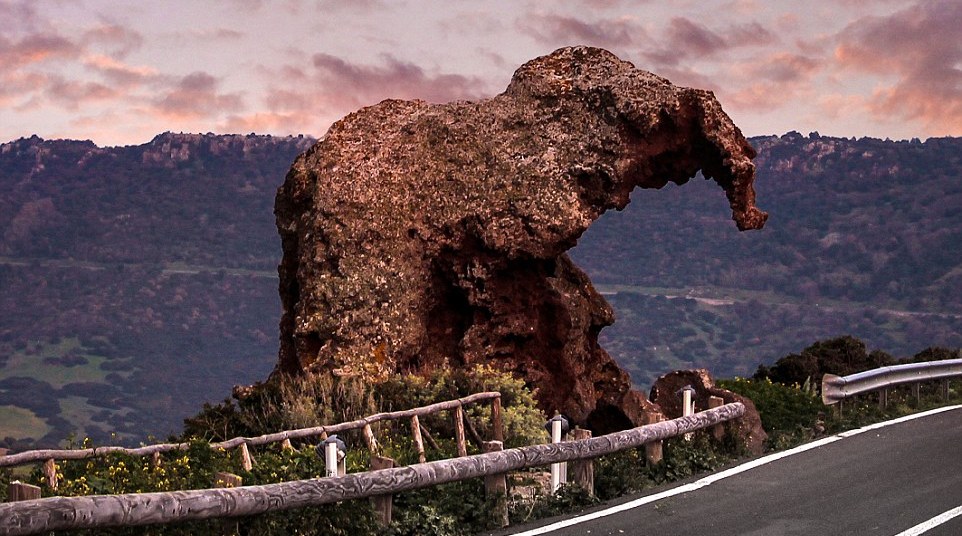 An unusual rock formation surprised drivers just like an elephant located Sardinia Italy. The Elephant Rock of Castelsardo describes as a peculiarity due to it’s resemblance with trunked animal. The below pictures were taken by a student Giulia Lupino.

She is curious about Elephant rock from several years, but finally she travelled down to State Road 134 to capture photographs of the Rock. The Elephant Rock was known with the name Sa Pedra pertunta that signifies perforated stone.

The massive mass of trachyte stone is thought to have been part of rocky complex of Monte Casteddazzu, but as the time passes, it broke away and rolled down the valley to it’s present location on the trunk road. Geologists believe, erosion led to the unusual appearance being formed with the perforated boulder bearing what looks like a trunk. Therefore, it is not the only natural formation to resemble with large creature.

The young (19 years) photographer said, the bizarre rock has the form of an elephant about four meters high looks incredible to see from each side. The true sculptors of rock initially thought a small one, but actually it is massive in fact. Moreover not only does the rock add to the natural beauty of the area.

But it also has archaeological impact as it contains two ‘Domus de Janas’ – a type of chamber tomb found in Sardinia. Moreover, the walls of the frequent erratically shaped chambers have relief decorations, cow horns and bull heads on a low base formed in the rock.

A similar type of Rock Formation is located on the island of Heimaey in Southern Iceland; a basalt rock on the ocean side cliffs bears a weird resemblance to enormous elephant complete with wrinkled skin reaching it’s trunk into the sea.

This rock is believed to form by volcanoes, rising out water. The elephant rock of Iceland can be found on the largest island in the Vestmannaeyiar, one of most widespread tourist attractions in summer months.