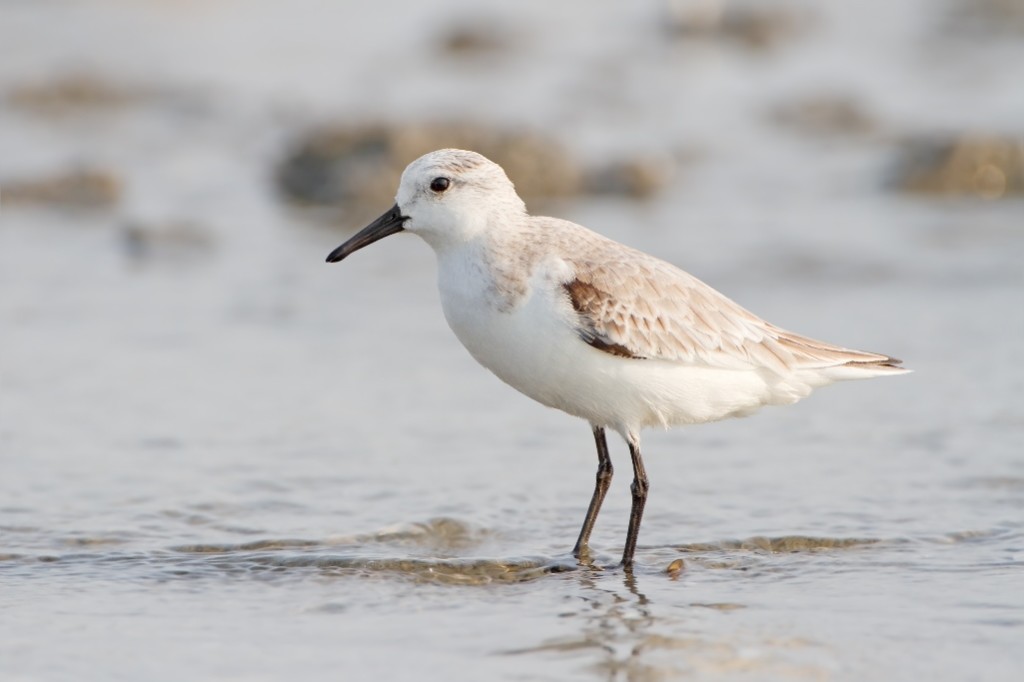 The dunlin and Sanderling are small, gregarious waders often seen on our mudflats and long sandy beaches in winter. The dunlin is one of our smallest wading birds, at a length of about 18cm (7in) or so. Moreover throughout the year it can be seen at almost any estuary, muddy beach or harbor. Inland, it is surprisingly common; sewage farms, flooded fields and the shores of reservoirs are good places to see dunlin in winter, and in summer it can be found in the moorland areas where it breads.

Therefore, dunlin is easy to recognize in the summer because it has a characteristic black patch on its belly. The upperparts are a rich Rufous brown streaked and spotted with black. The breast is heavily streaked with brown. In the autumn, the dunlin moults to its winter plumage, losing both its body and wing feathers in spring, when it regains its breeding plumage, only the body feathers are moulted and replaced. The dunlin’s winter plumage is quite drab and inconspicuous, the upperparts being grey brown and the underparts a dull white.

Dark-shouldered sanderlings, the sanderling are slightly larger than the dunlin and usually inhabit sandy estuaries and ling sandy beaches. In Britain, it is most often seen in its winter plumage, which is much more striking than that of the dunlin. Its underparts and much of its head are pure white and its back and wings are pale grey.

Often, there is a dark patch on the shoulder of the wing, mostly called the wrist. Like the dunlin, the sanderling moults its body feathers in the spring. Its summer plumage resembles that of the dunlin, except that it has a white belly. The best chance of seeing a sanderling in full breeding plumage is in spring, when many birds migrate north along our coasts, having just grown a new set of body feathers.

Beak differences a good way to tell the difference between the dunlin and the sanderling is to look at the beak. British dunlins have downward curving beaks about 3cm (1-4/5) long, whereas the sanderling has a shorter (2.5cm/1in), straight beak. There is considerable variation in beak lengths among dunlins, the British birds in general having shorter beaks than those breeding further north. For example, Canadian dunlins have beaks averaging about 4.5cm.

The beaks of these two species are different because they have different methods of feeding. The dunlin, when feeding, walks with a purposeful air, head held low, constantly pecking at the surface of the mud and probing for tiny molluscs. The tip of its beak is particularly sensitive and allows the bird to detect, by touch food lying below the surface of the mud. The sanderling, on the other hand, feeds at the water’s edge, hurrying back and forth like a clockwork toy following each wave as it breaks and recedes.
Advertisement

It can be seen skillfully snatching small creatures such as san hoppers from the edge of the surf. The dunlin and sanderling both in summer and winter plumages, in flight, both show a white wing-bar throughout the year; though on the sanderling it is much more prominent. In winter, flocks of dunlin can be seen flying along the coast and flashing grey or white as the bird’s man-oeuvre in unison.

Both dunlins and sanderlings feed until high tide and then fly off to special roosting sites on shingle banks and marshes or sometimes, on grassy fields. There the birds gather in their thousands for two or three hours until the tide has retreated and they can return to feed. Both on the ground and in flight the two species form their own groups.

In the winter, a large flock of dunlin’s flying to or from the feeding and roosting areas can be a marvelous spectacle. Each bird in the flock flies in precise formation only a few inches from its neighbor, and with each change of direction the color of the flock changes. First you see the bird’s dark upperparts then as they swerve to one side, the dark changes to the white of their underparts.

Migration routes are normally seen in Britain, and all sanderlings are winter visitors or passing migrants. Migrating sanderlings arrive in the British Isles each July and August from their breeding grounds in Greenland and Siberia. Some spend the winter here and the remainders fly on South to France, the Iberian Peninsula and Africa.

In May, our wintering Sanderling return to their summer grounds, joined by migrants passing through Britain from further south. Britain is one of the few countries in the world with both breeding and wintering dunlins, so their passage through Britain is not as distinct as sanderling migrations.

Nevertheless, dunlins breeding in Greenland, Iceland the Netherlands and around the Baltic Sea all migrate through Britain on their way to or from their wintering areas in southern Europe and North Africa. Dunlins breeding here also fly south for the winter, but this loss is more than compensated for by the arrival in Britain for the winter of large numbers of dunlin from Scandinavia and Russia.

As hard weather sets in further north, so more and more dunlin arrives on our coasts; their numbers usually reach a maximum in January. In spring our wintering dunlins return to their breeding grounds, to be replaced by our own breeding population. Most of our breeding dunlins settle in Scotland and Northern England, but a few nests in Wales and Ireland and there are even some on Dartmoor the most southerly breeding dunlins in the world.

Moreover, the breeding season for dunlins usually starts in April or May. A typical site is a damp, peaty, upland moor, though some nest beside lakes and others in salt marshes. The nest is a tiny hollow, hidden among heather or a grassy tussock to provide shelter. The female lays four eggs the typical number for a wader at the rate of one every day or two. Both parents help to incubate the eggs until they hatch after about three weeks.

Dunlin chicks are superbly well camouflaged with yellow, butt, black and white down. When danger threatens they lie down and become almost invisible. They feed mainly on midges and crane fly larvae, which are plentiful at the time of year. The chicks grow quickly and can fly after about 25 days, when they leave for the coastal feeding sites.

Occasionally, dunlins manage to raise two broods in a season, but this is rare. The sanderling on the other hand, normally succeeds with two broods by laying one clutch of eggs in a first nest, followed immediately by another clutch in a second nest. Both clutches contain four eggs; one is incubated by the female and the other by the male.

Sanderling chicks have the same camouflaged down as dunlin chicks and they fledged in much the same length of time. Soon after, they begin their long migration south. Some of the birds still have their winter plumage but most have moulted ready for the breeding season. Soon they will be migrating to their breeding grounds far to the north. 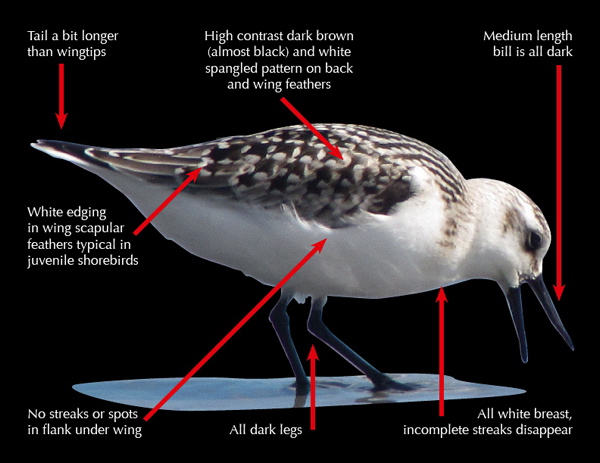 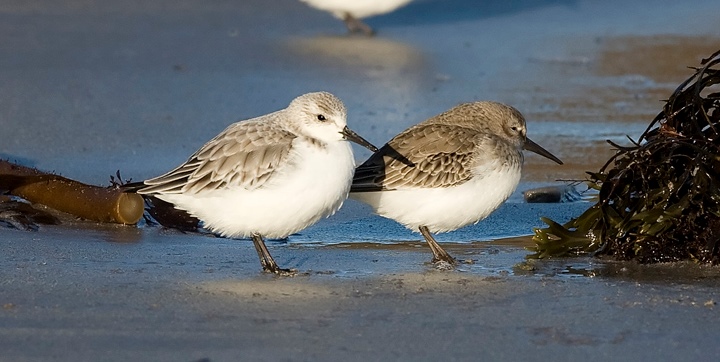 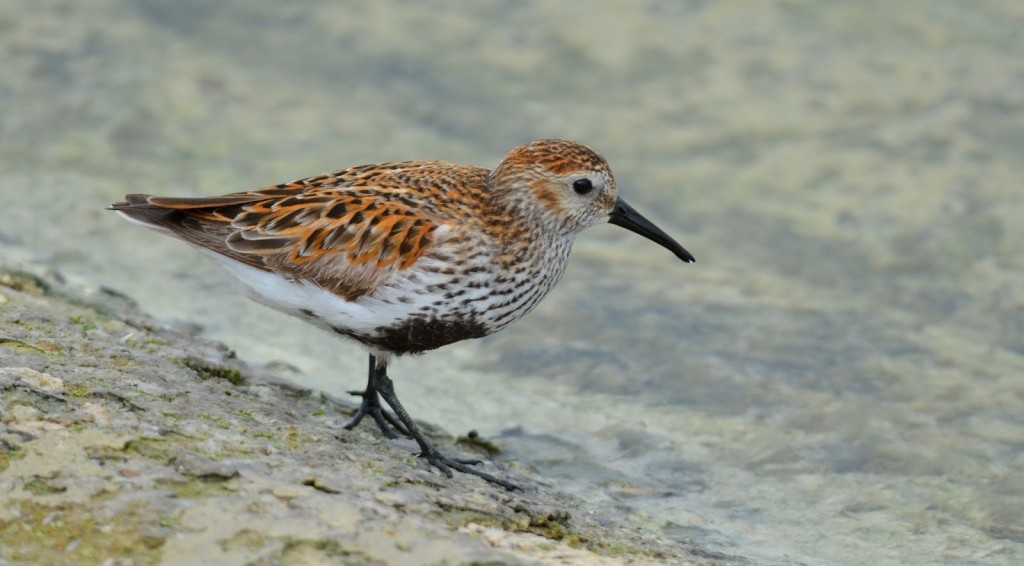