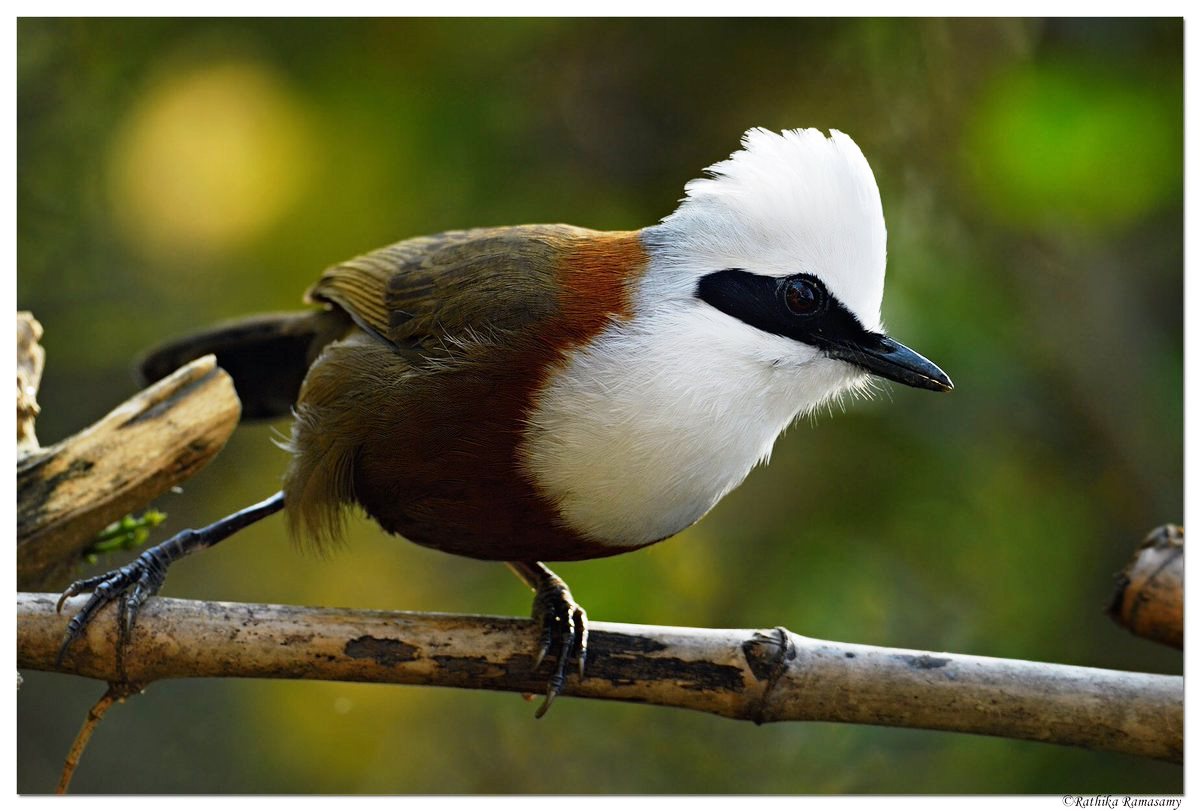 The eye-catching White crested Laughingthrush ((Garrulax leucolophus) is a member of the Leiothrichidae family. This bird is mostly found in forest and scrub from the Himalayan foothills to Indochina. The broad-leaf evergreen forest and mixed deciduous forest, disturbed, secondary and regenerating forest. However, the White-crested Laughingthrush is not indigenous to Singapore.

A charismatic “cute’-looking bird” usually moving in flocks ranging from pairs to noisy gangs of eight, has mostly chestnut-brown upper-parts, a white head and breast with a protuberant white crest that sometimes appears a dirty grey due to the accumulation of dust, as well as a broad black stripe running from the lores across the eye to the ear coverts.

The bird is formerly included the Sumatran Laughingthrush as a subspecies, but nothing like that species the plumage of the white-crested Laughingthrush is rufescent-brown and white, and the black mask is relatively broad. In Thailand it is an introduced as a cage bird and somehow escaped and from a sustainable population. Moreover, it has become well established since 1995, and its population has increased, can be commonly encountered in many locations.

This species has an extremely large range, and hence does not approach the thresholds for Vulnerable under the range size criterion, hence not under threat and least concern. However, the population is suspected to be in decline owing to ongoing habitat destruction and fragmentation.

Somewhere between March to August White-crested Laughing Thrushes form close bonds during the breeding season. The bird habitually builds a wide, shallow nest at least six feet off the ground, normally constructed of bamboo leaves. The birds lays 3 to 5 eggs incubate for a short period of 15 days, letting White-crested Laughing Thrushes to generally produce at least two clutches of young each year. In order to be successful, the parents enlist support.
Advertisement