About eight kilometers from Terni, The Italian City has a magnificent three-tiered waterfall which is called Cascata delle Marmore. The tiered waterway, surrounded by trees and greenery, looks like a tremendous force of nature. It is also recognized Marmore Falls were once part of the Grand Tour of wealthy Englishman of the 17th and 18th century. He went to Italy and France to seek out places of art, culture, and roots of Western civilization.

The Marmore Falls located at The River Velino, took a completely different path ending in a swamp within the plains of Reiti. The marshy and motionless waters of the swamp were believed unhealthy and were attributed to numerous illnesses that affected the population living there.

The Roman consul Manius Curius Dentatus gave a plan to construct a canal here. Later on, it was named Curiano Trench, in 271 BC, to drain the swamps and direct the excess waters into the natural cliff at Marmore creating the falls. From this point, the water fell into the Nera River below.

Though, the solution didn’t work out as expected. The Reiti valley continued to flood, and when water was high in the Velino River. It now flooded the Terni valley too where the water was diverted. The man-made canal and the resulting flood became a long source of dispute between the inhabitants of Terni and Reiti valley.

The former wanted the canal closed, whereas the latter sought the flow of the falls to increase to accommodate the excess water. The problem between the two cities was so argumentative. So, the Roman Senate was forced to address it in 54 BC, but an agreement couldn’t have arrived and the matter remains unsettled for many centuries.

After the fall of the Roman Empire, the barbaric invasion and the development of the feudal system caused the planned territories and the countryside to be gradually abandoned. The lack of maintenance of the Curiano channel caused the base of the channel to accumulate silt and the Reiti valley once again began to flood. It was not until the 15th century that Pope Gregory XII ordered the construction of a new canal to restore the original flow.

Further improvement was made by Pope Paul III in the mid-16th century and a regulating valve was installed to control the flow. The final modifications were given the Cascata delle Marmore the present appearance.

Cascata delle Marmore received its current look in 1787. When an architect Andrea Vici diverted some of the water to create a series of lateral cataracts on the instruction of Pope Pius V1. In 1896, the newly formed steel mills in Terni started to use the water flow in the Curiano Trench to power their operation to generate electricity.

Tourists try to be there the moment the gates are opened to see the powerful rush of water. Twice a day, the power plant flips a switch and lets the water once again gush over the cliffs as it had for millennia.

A beautiful path along the falls lets the visitor hike up to the top of the falls. Also, along the way, a tunnel leads to an observatory next to the falls, where a guest is guaranteed to get soaked.

Find out the best deal at Booking.com to make your trip memorable.
Booking.com 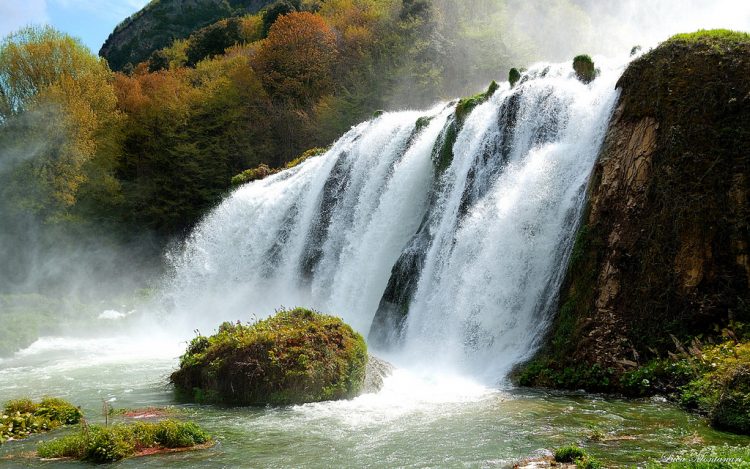 The Deadliest Path in England: The Broomway