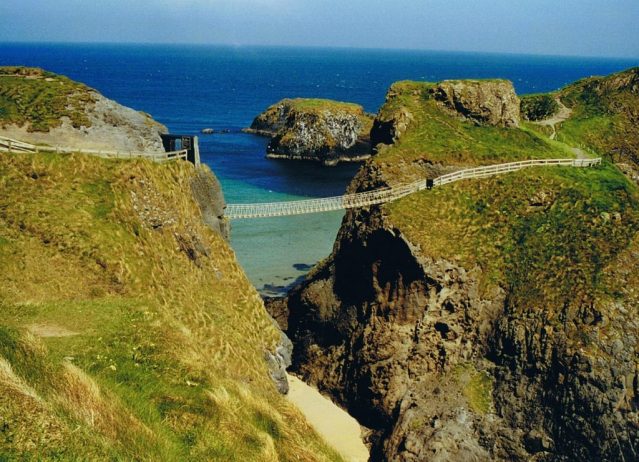 A short coastal footpath leads to a Carrick-a-Rede Rope Bridge is a famous rope bridge close to Ballintoy in County Antrim, Northern Ireland. The bridge connected the mainland to the small island of Carrickarede. On the way to the splendid bridge, there are amazing vantage points to stop and see the majestic natural beauty. Though, the geology flora and fauna have won Carrick-a-Rede recognition as an area of distinctive scientific interest.

Fulmars, kittywakes, guillemots, and razorbills breed on the islands near the rope bridge. The magnificent rope bridge offers tourists not only delightful views of this wild Atlantic coastline, but also the exclusive and exciting experience of crossing a suspended rope bridge. Therefore, the present bridge was established in 2008 and replaced numerous previous versions, dating back more than a few hundred years, which were used by local fishermen.

In the early days, the bridge was narrower and had only a single rope as a railing. However, these days the rickety bridge is safely enclosed by a network of ropes on both sides, but not all tourists are willing to wiggle and wobble their way. Since Carrickarede Island is no longer used by fishermen, the National Trust, over the years, has maintained the strengthened rope bridge.

Along the coast of this area, as with much of the Antrim plateau, the cliffs are of basalt with the characteristic Ulster chalk beneath. At Carrickarede, the ancient volcanic pipe has left dolerite, a harder rock than basalt, which erodes more sluggishly. Moreover, behind the dolerite, to the south, the vent is well filled with pyroclastic rocks that break down more effortlessly, mostly coarse tuff agglomerate. Though, the combination of the firm rock out front and the softer rock behind, with long-term erosion by the waves, has in the end left this small island.

It is no, doubt, that Carrick-a-Rede also motivated an exciting rope bridge experience. Thus, traditional fishermen erected the bridge to Carrick-a-Rede Island over a 23 m-deep and 20 m-wide chasms to check their salmon nets. Nowadays, tourists are immensely drawn here simply to take the rope bridge challenge! Moreover, once you reach Carrick Island, the reward is seeing the different birdlife and a continuous view across to Rathlin Island and Scotland.

There’s only one way off the island, back across the swinging bridge! Well, don’t look down! The Carric-a-Rope Bridge is one of the best love attractions, with a rocky Island connected to the cliffs by a rope bridge. Here you can have stunning views of special scientific interest, unique geology, flora and fauna, fantastic bird watching. Please be noted, that the bridge is open from Mid-March to early October when it’s taken down, so it won’t be swept away by winter storms. 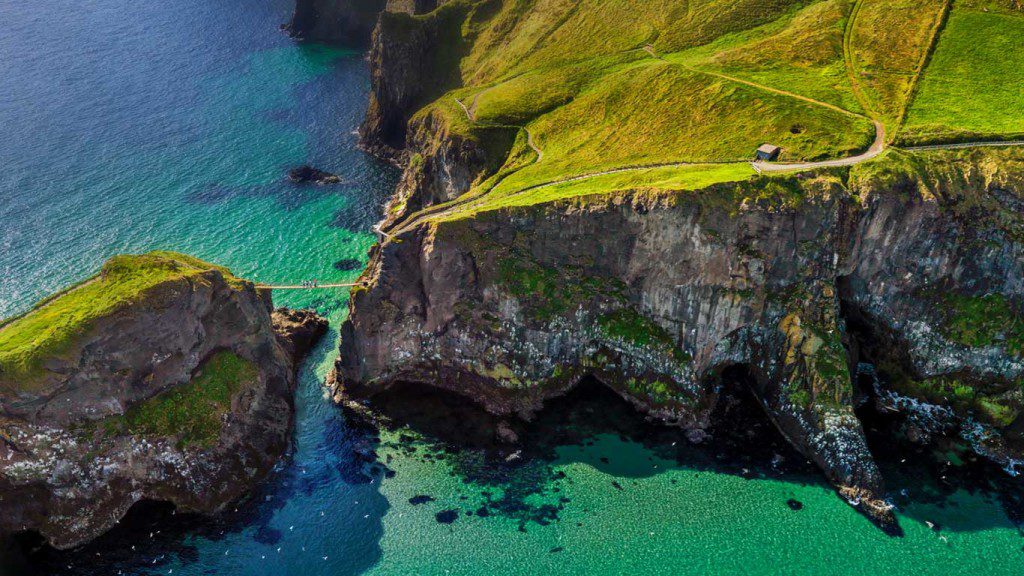 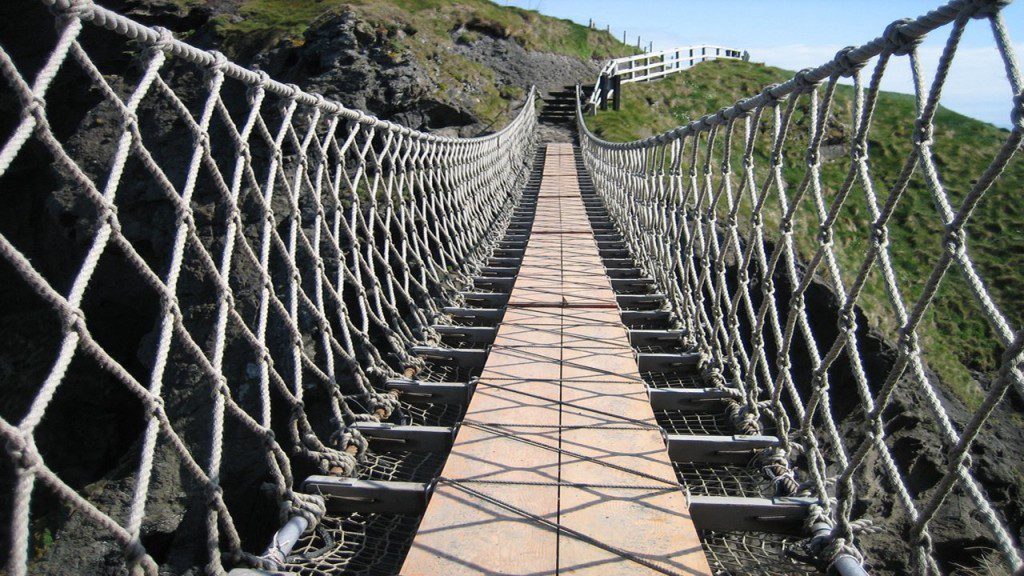 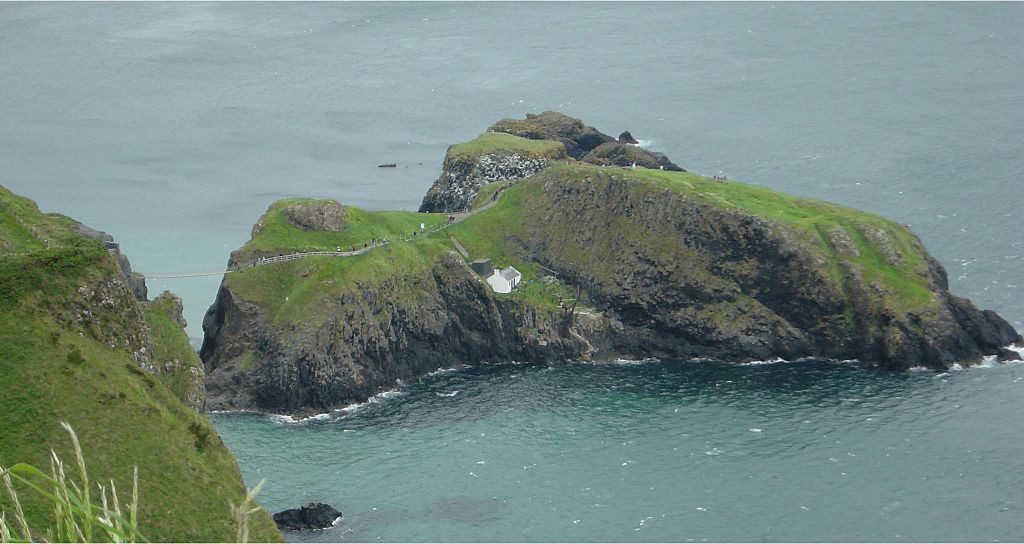 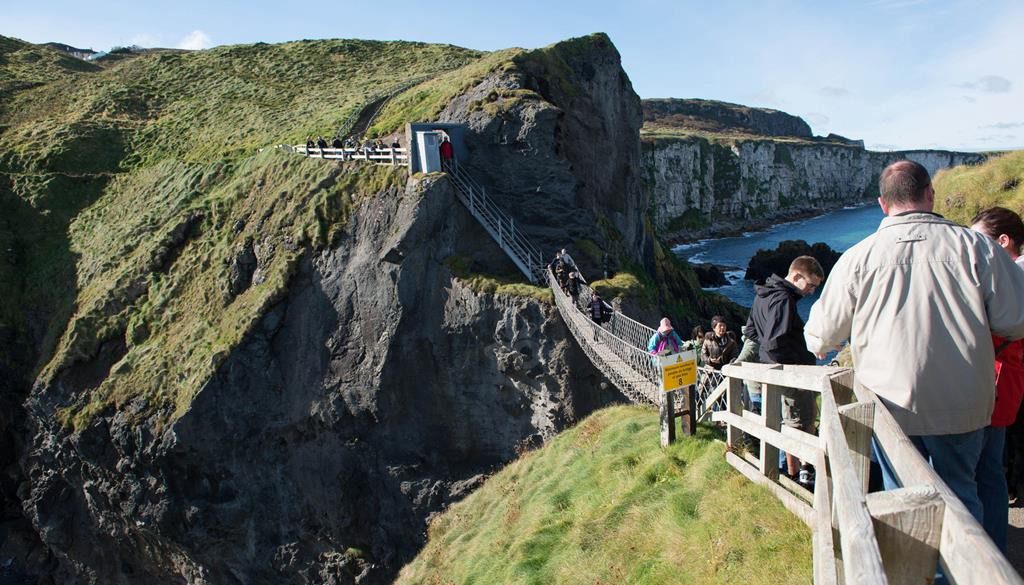 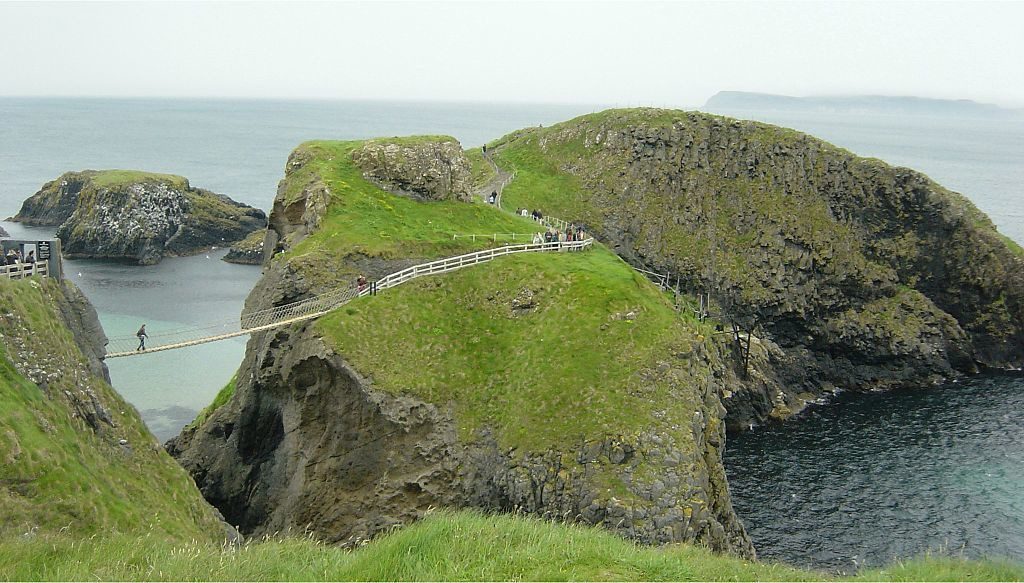 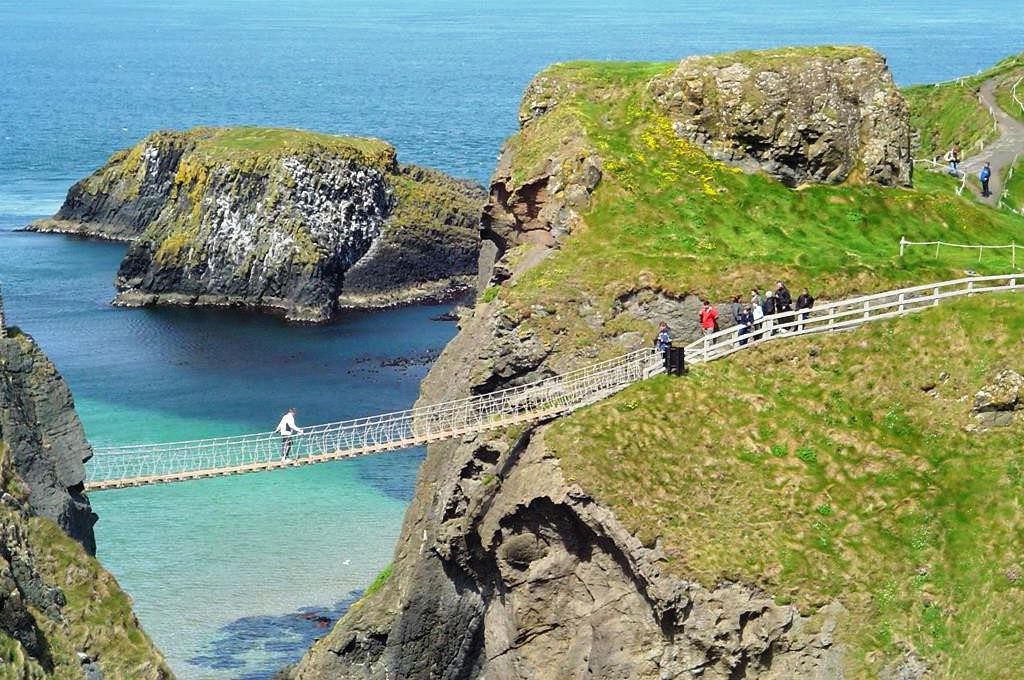 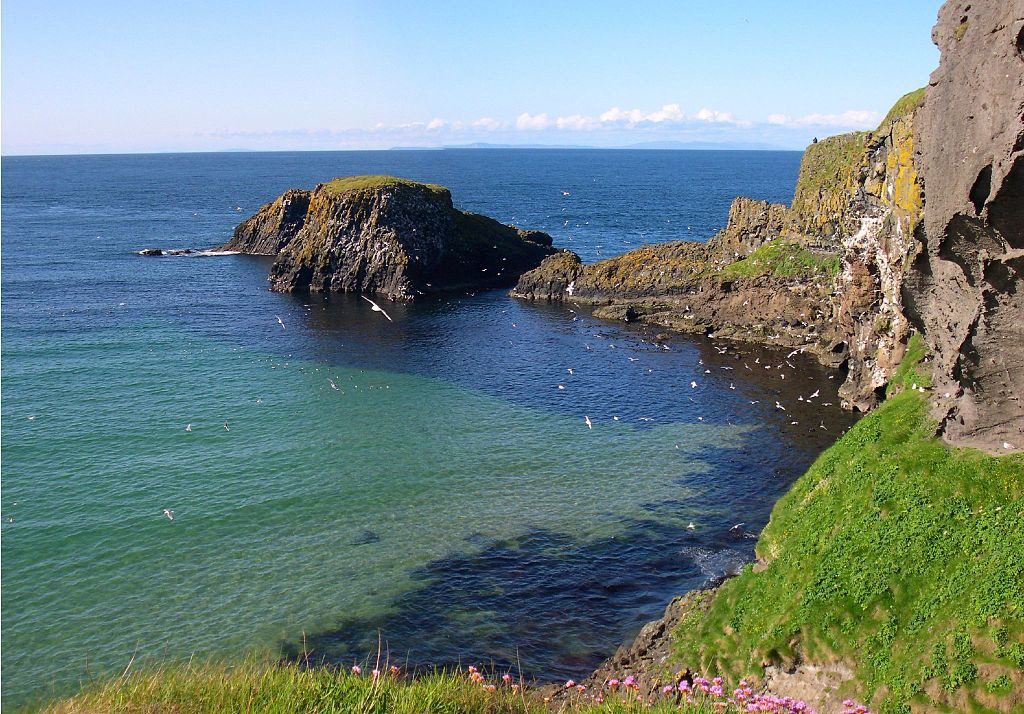 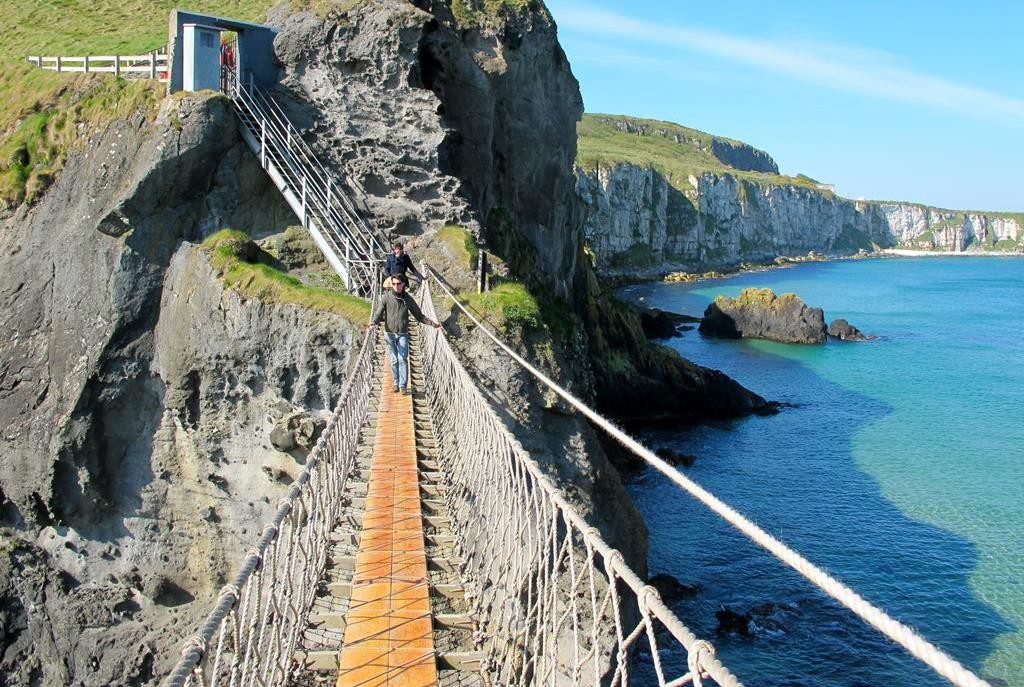 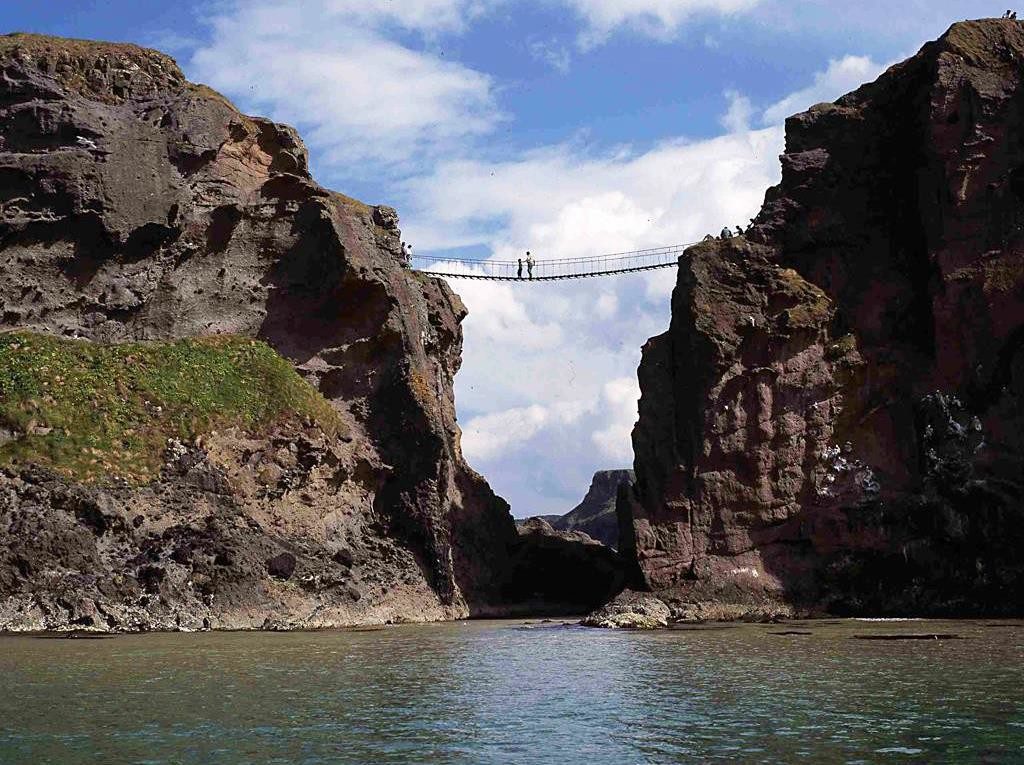 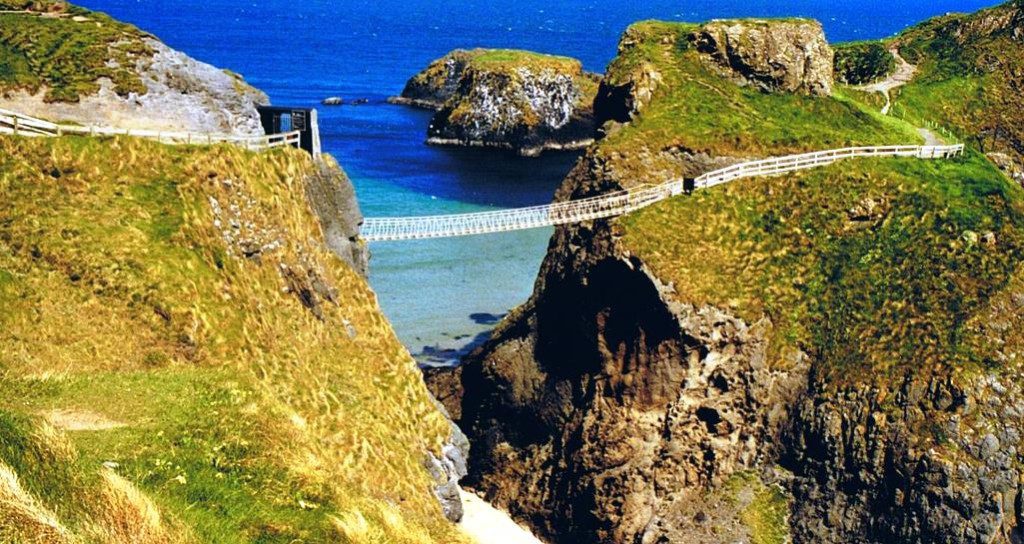 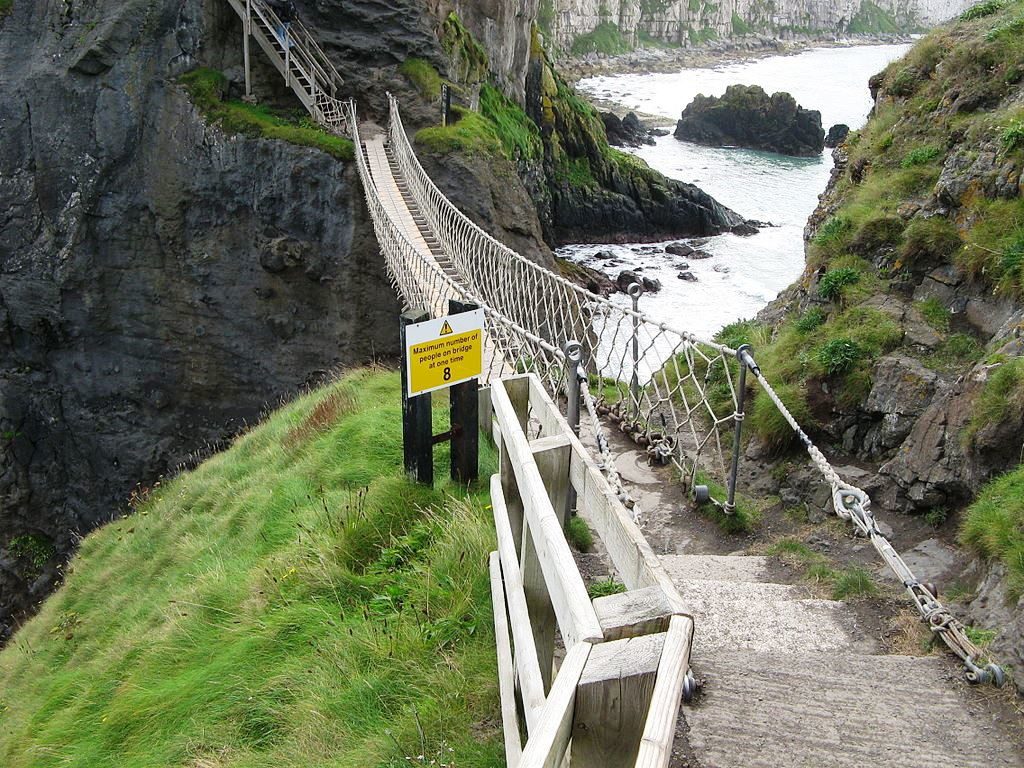