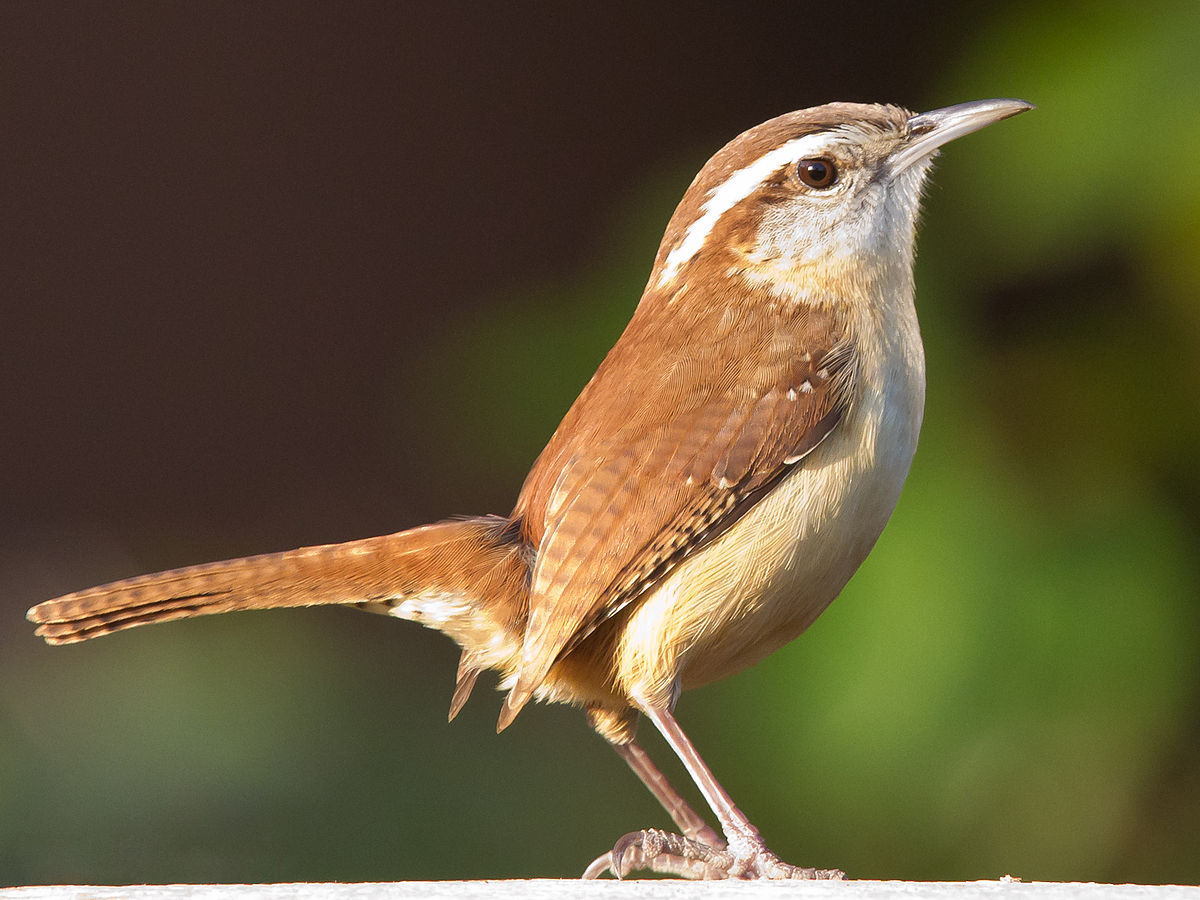 Many birders confused about the difference between Carolina Wren vs House Wren. They have close resemblance make them difficult to identify.

Carolina Wren (Thryothorus ludovicianus) is a beautiful small bird having rusty upperparts, cinnamon underparts, and a different white eye-stripe. The Wren is about 4.9 to 5.5 in long, with an 11 in wingspan and a weight of about 18 to 23 g. The male and female birds are identical in plumage. However, the male is every so often slightly larger. Carolina Wren is a stocky and large-headed sparrow size bird with a bold white stripe above the eye.

And it is warm rusty brown above and buffy cinnamon below dark brown bars on wings and tail and white chin, throat, and upper breast. It is a large wren; the second largest in the United States species after the cactus wren. The bird’s preferred habitat is in dense cover in forests, farm edges, and suburban areas. Carolina Wren song is a bold “teakettle, teakettle, teakettle.

The bird songs can be confused with the Kentucky warbler. When Carolina Wren finding a mate, he tries to make pairs and maintain a territory and stay together for several years. The diet consists of invertebrates, such as beetles, grasshoppers, true bugs, katydids, spiders, ants, bees, wasps, small lizards, frogs, vegetable, and fruit pulp and various seeds. Listen to the songs of Carolina Wren.

The House Wren (Troglodytes aedon) is a small songbird of wren family. The bird is generally a dull grayish-brown with darker barring on the wings and tail. The bird eyebrow line is faint, the bill is thin and slightly de-curved, and the tail is longish and often kept cocked. Hence, the bird is overall a brown, darker above and lighter below and pale streak above the eye.

It has a light eye-ring and their back wings have dark narrow dark barring long bill, yellow at the base, and black at the tip. Narrow black barring on tail, hence the bird song is an energetic, flutelike melody of gurgling outbursts.  This is the most widely distributed bird in the Americas. Its taxonomy is highly complex and some subspecies groups are often considered separate species.

An adult bird size is 4.3 to 5.1 in long, with a 5.9 in wingspan and weigh about 10 to 12 g. The House Wren is a rich bubbly songbird and commonly heard during the nesting season but rarely afterward. This bird mainly eats insects such as butterfly larvae, spiders, and snails. The House wrens rarely attend mixed-species feeding flocks. As a birdwatcher, you should know the Carolina Wren vs House Wren. Listen to the Song of House Wren.