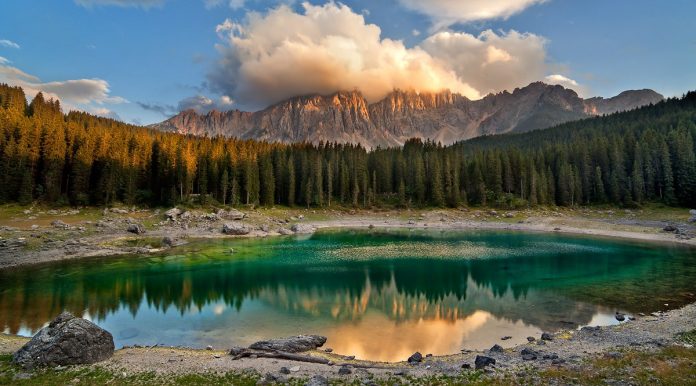 The Carezza Lake is located in South Tyrol Italy and is considered one of the most beautiful of the many Alpine lakes. The lake lies in the western Dolomites, about 25 kilometers from Bolzano at an altitude of 1,520 meters in the municipality of Nova Levante. It is not particularly large: approximately 300 m long and 130 m wide.

Lake of Carezza in Val d’Ega valley is well known for its wonderful colors and also called “Lec de Ergobando” and can be called Carezza Lake is a pearl of the Dolomiti. Nestled between an ancient forest of grand firs and the Latemar mountain in a place of legends and beauty a nymph lives under its emerald waters.

Lake Carezza is the most beautiful lake in the Alps because its reflection of the Rosengarten creates massive twinkles on the surface like jewels sparkling in the sun. Legend has it that a magician smashed the rainbow he had created to seduce a mermaid into the lake, sending lovely colors tumbling into the water.
Advertisement

The chirping birds loved listening to the water nymph, but as soon as they heard some strange noise, they would twitter nervously and fly around in fear. Thus, the nymph would have time to dive into the lake and disappear and never came into danger. The lake is mainly fed by subterranean springs from the Latemar massif.

The lake depth and size changes from season to season and depends on the weather, and at its max depth are 22 m deep. The little mountain lake is renowned in particular for the smooth, deep green of its water and the lovely backdrop of the mountains with the Catinaccio and Latemar mountains in the background.

The lake is associated with many South Tyrolean legends and numerous writers and painters have selected the lake as the motif for their paintings and tales. The lake can be reached on the State road 241 (Val d’Ega State road, also recognized as the Dolomites State road). The road to the Passo di Costalunga, which runs in close nearness to the lake, is particularly busy in summer and during the day causes a certain amount of trouble.

The lake is fenced and it is prohibited to walk on its banks. The lake is at its most striking in the evening or early morning when the streams of tourists have not yet monopolized the nearby car park and the Catinaccio and Latemar mountains are reflected with the green of the Carezza forest in the crystal-clear water. A beautiful water nymph once lived in the lake. The Lake of Carezza is still filled with the brilliant colors of the rainbow and why the Ladin people call it the ‘Lec de ergobando’, the Rainbow Lake. 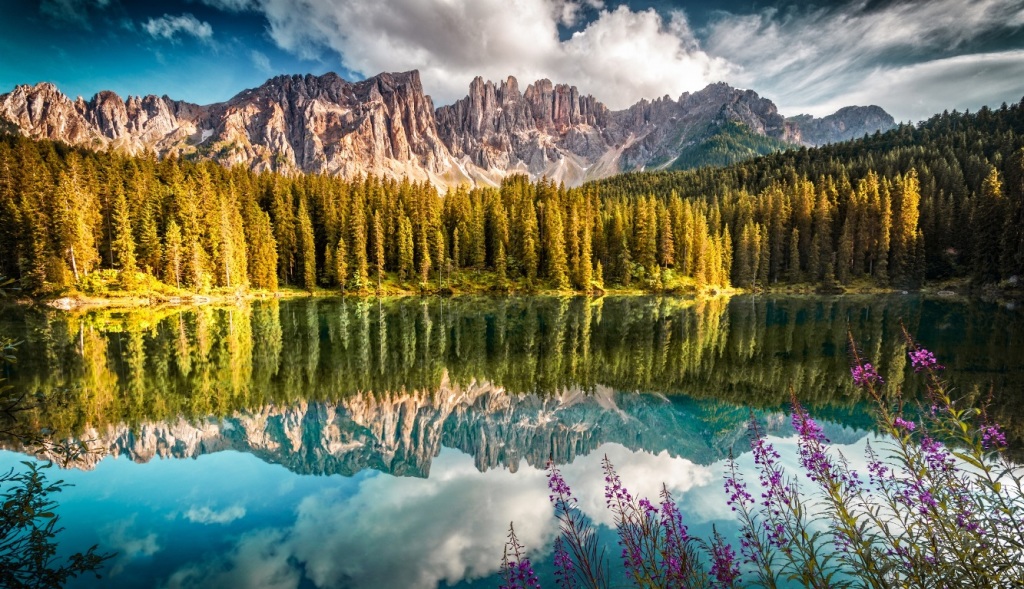 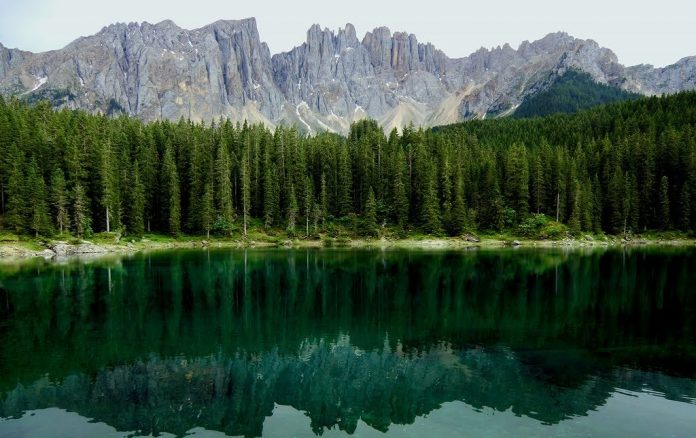 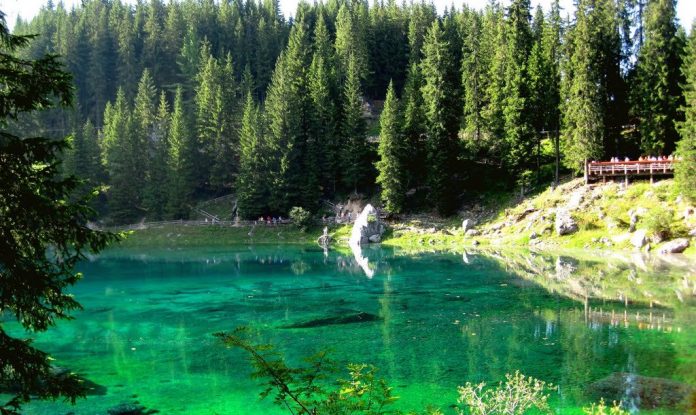 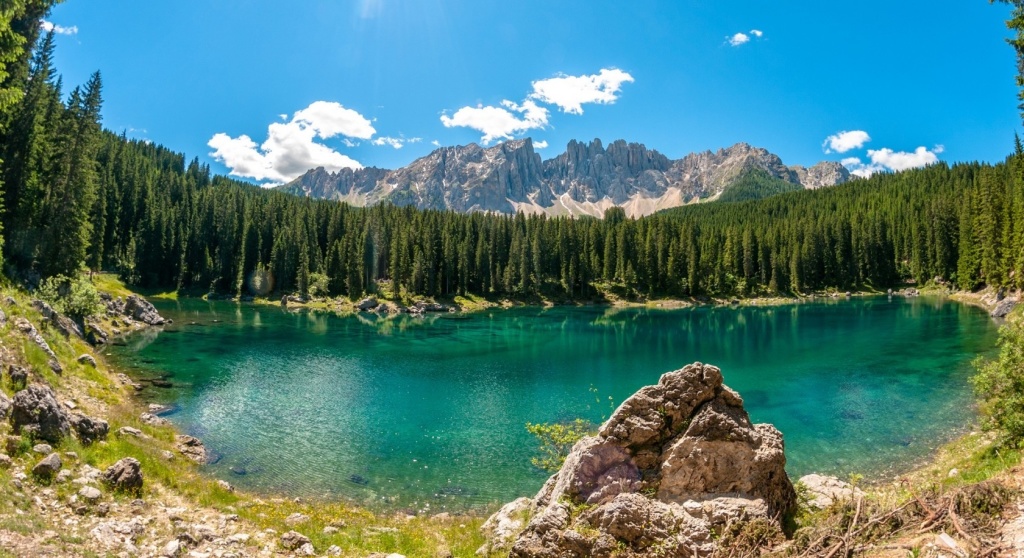 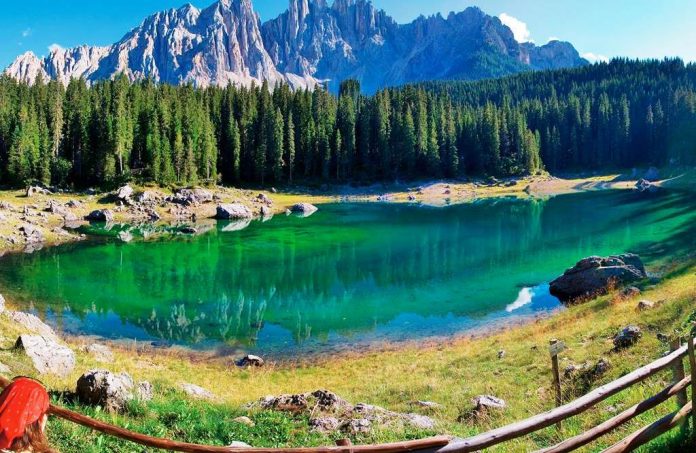 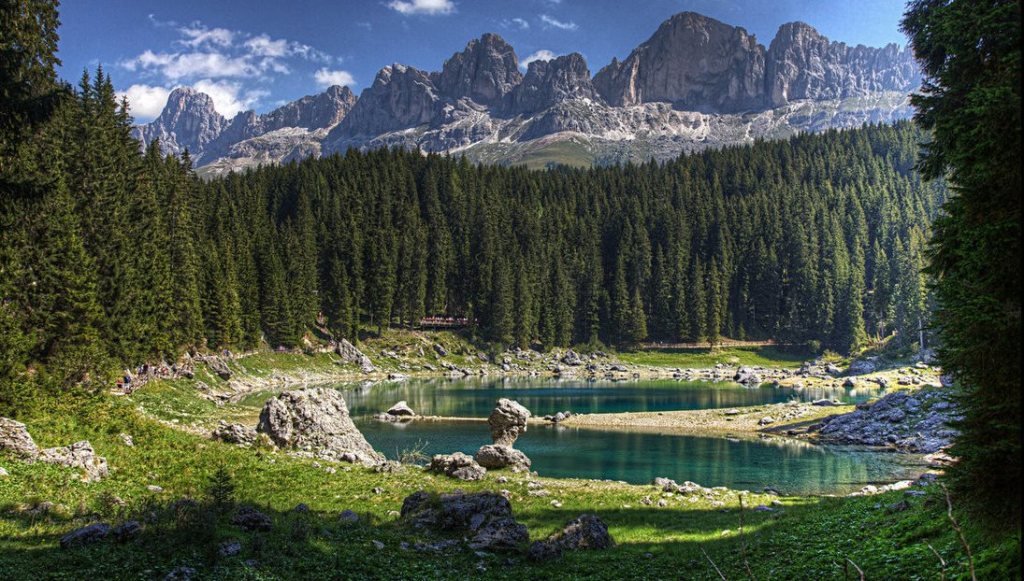 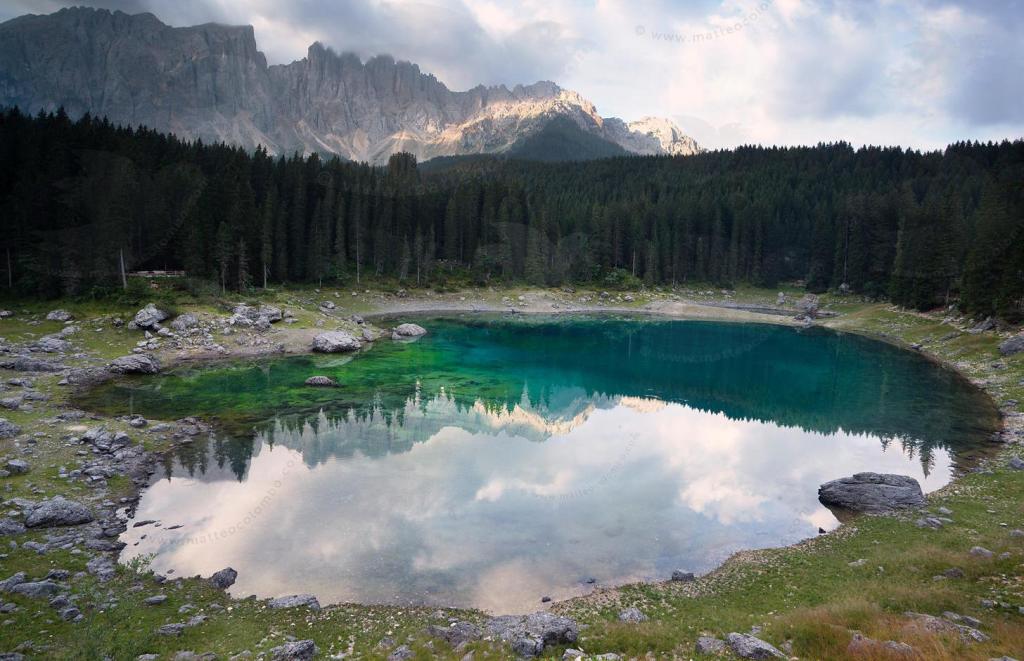 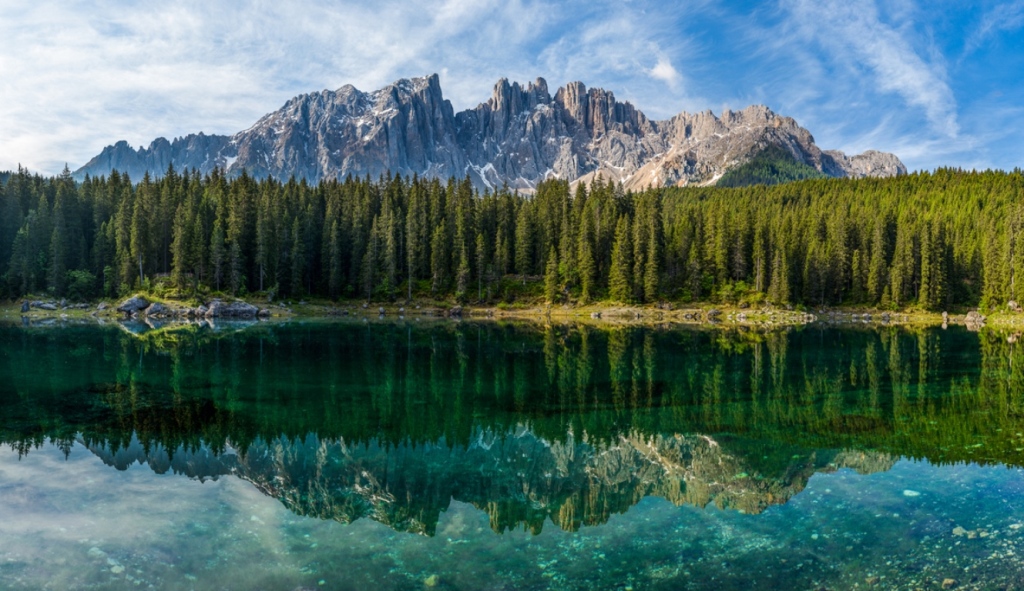 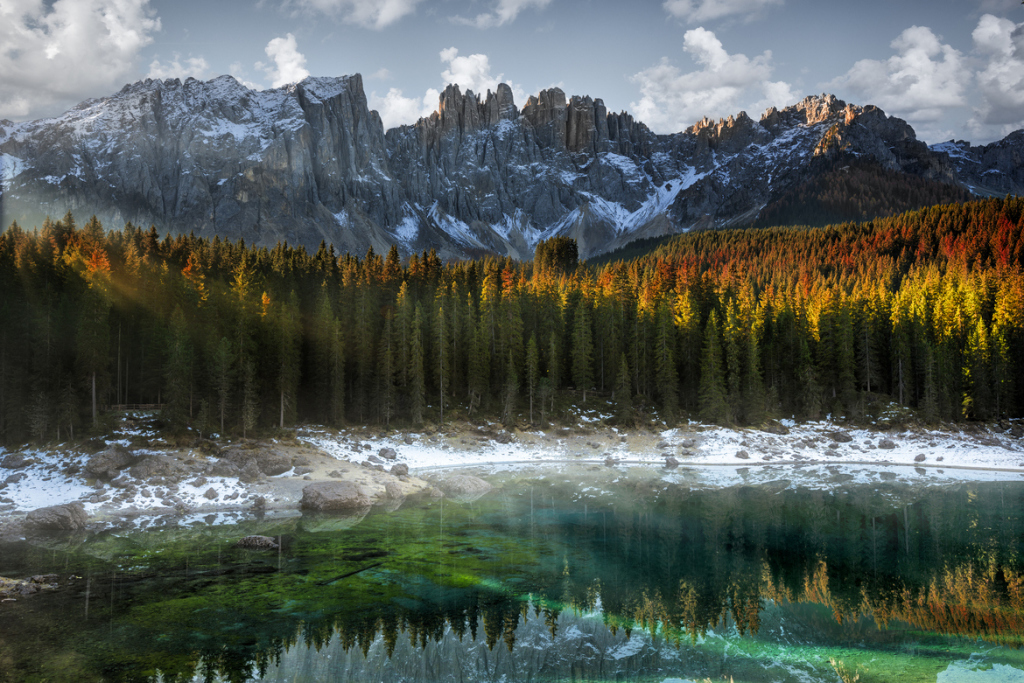 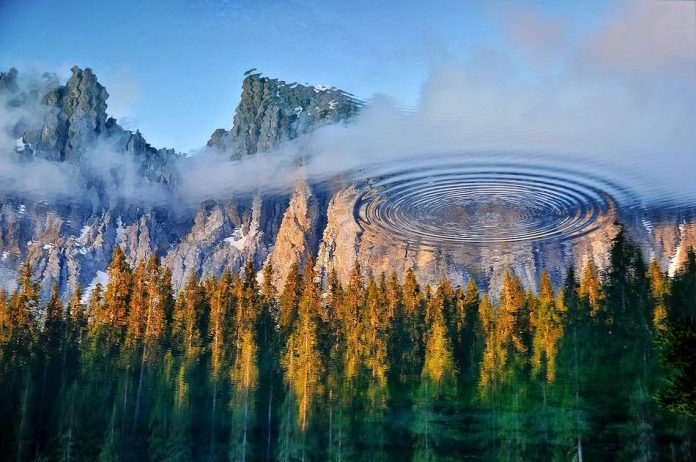 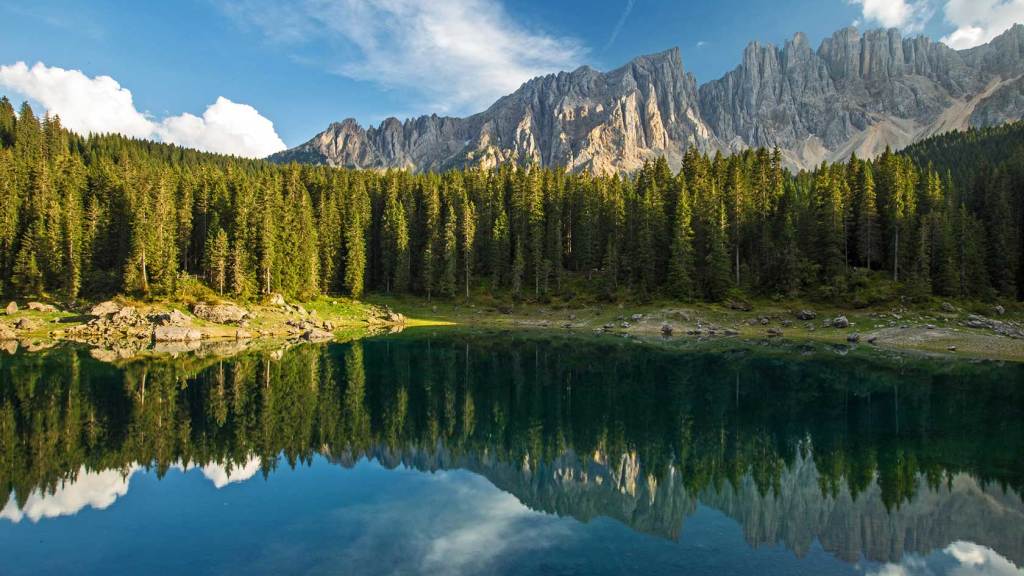 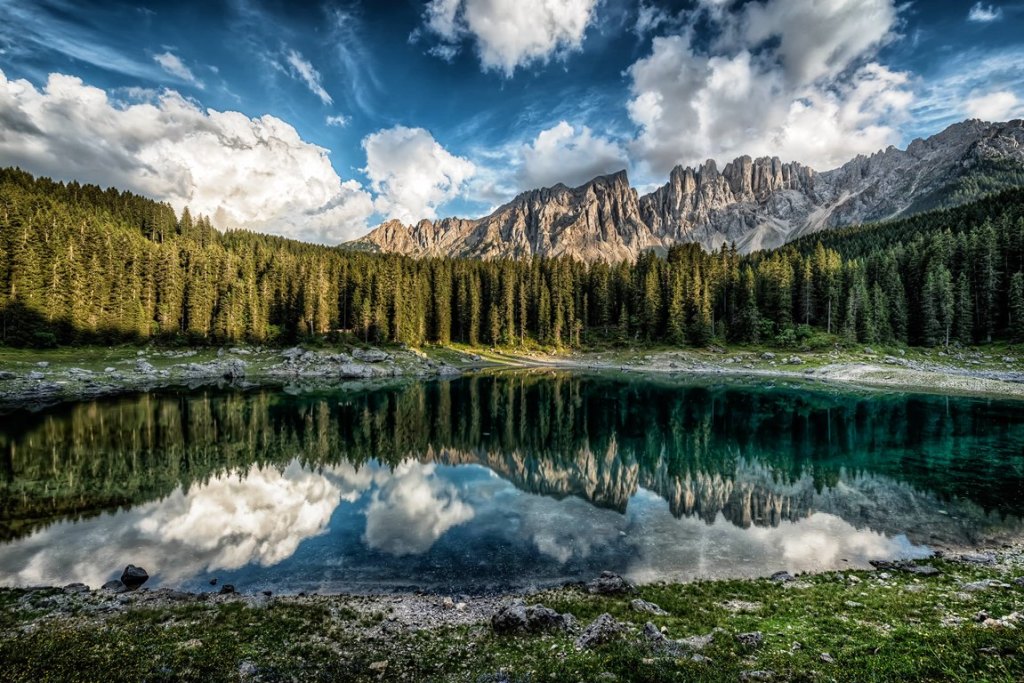 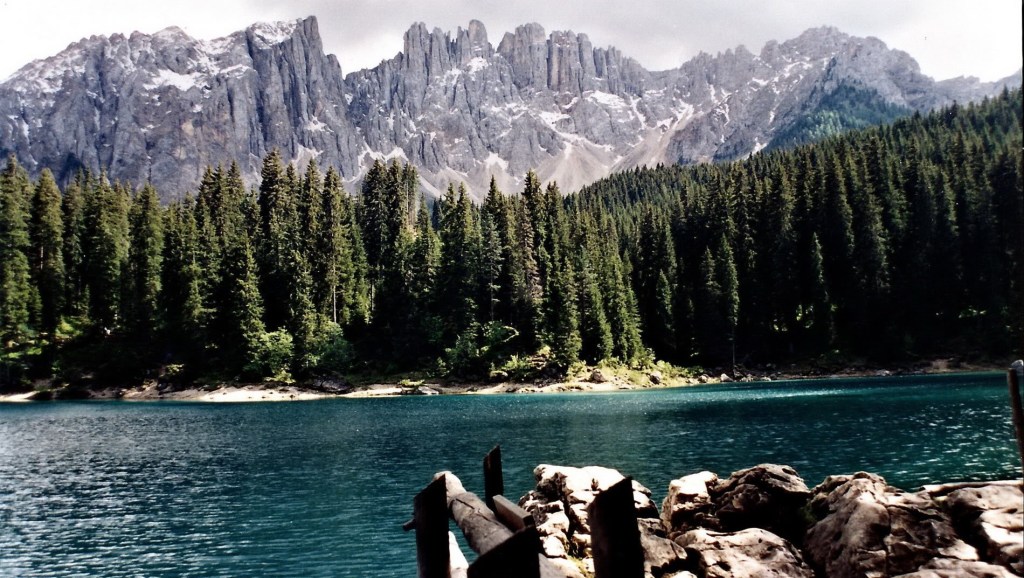 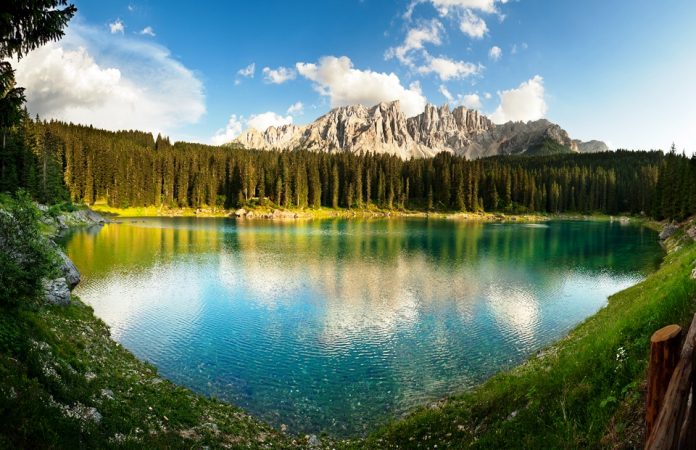 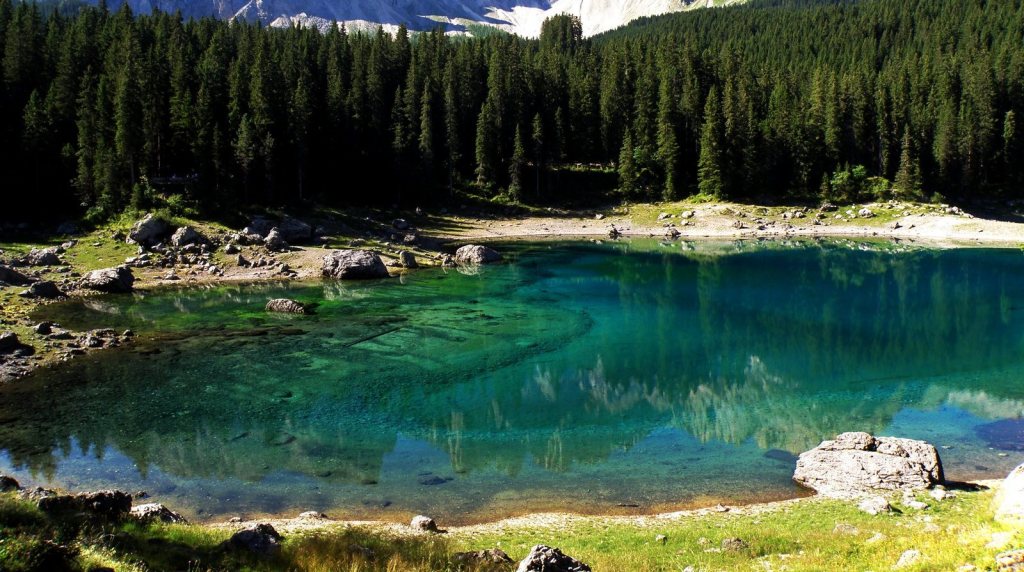 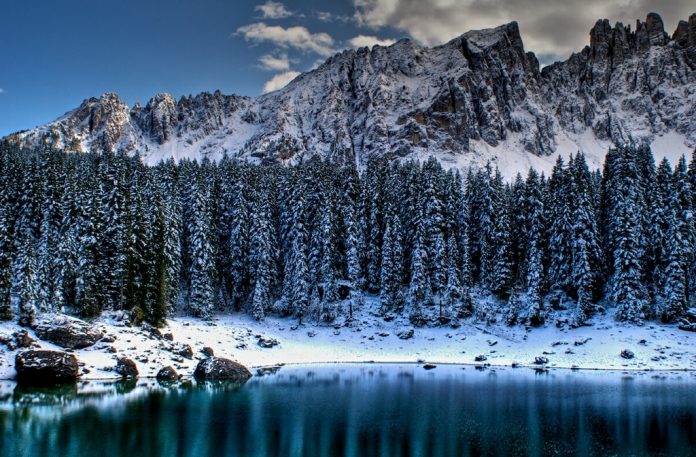