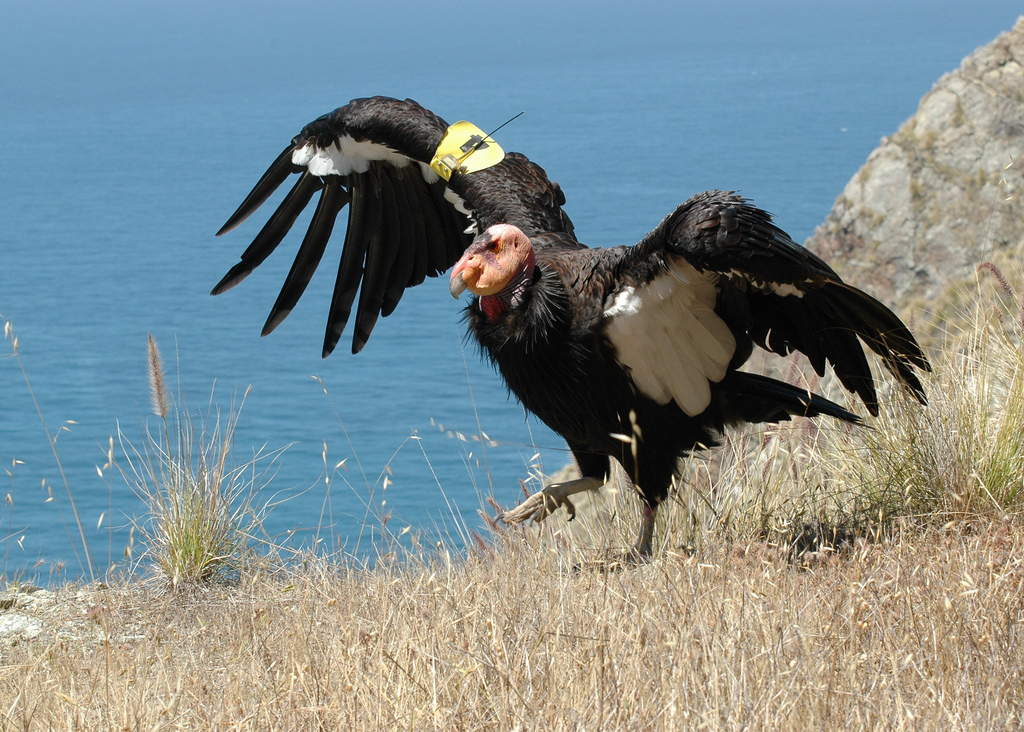 A New World vulture, the California condor is the largest North American land bird. In 1987, it became extinct in the wild due to poaching, lead poisoning, and habitat destruction. However, the species has been successfully reintroduced to parts of Arizona, Utah, and California.  But this does not mean, this majestic bird remains critically endangered.

This vulture is distinguished from other birds by its large black body with white triangles under-wing and its red-orange bald head.  California Condor with a wingspan reaching 3 meters (9 ft.) long. When it soars, the wings spread more than nine feet from tip to tip. It can soar and glide for hours without beating their wings. California condor is the largest flying bird in North America. They inhabit the forests, rocky shrub land and oak savannas of California, Arizona, Utah, and Baja California, Mexico.

California condors live in rocky, forested regions including canyons, gorges, and mountains. They historically ranged throughout the western U.S. from Canada to Mexico, with some populations as far east as Florida and New York. The endangered bird is uniquely adapted to carrying out their role as nature’s cleanup crew.

With a robust immune system, condors do not get sick when feasting on carrion despite consuming various strains of bacteria. From the air, they search for dead animals, like deer or cattle. They feed only on carrion (dead animals that they find).  Although they do not have sharp talons, they have long, potent beaks which can tear through tough hides.

Their heads are bald for hygienic reasons; a featherless face stays cleaner when submerged into carcasses. After feasting, condors bathe often in rock pools and devote hours preening their feathers. Hence, if they are unable to find water, they clean their heads and necks by rubbing them on grass, rocks, and branches.

The condors forage exclusively on dead animals, especially susceptible to lead exposure from carcasses left in the field. Although, lead poisoning from spent ammunition is the number one cause of death among endangered condors in the wild.

California condors can reach speeds of 88 km/h and altitudes of 15,000 ft. They have the powerful ability to travel 150 miles per day in search of dead animals to scavenge. Which include large mammals like cattle, deer, and sheep as well as smaller mammals like rodents and rabbits? Without a good sense of smell, they rely solely on their keen eyesight to find food. Several times, this bird simply looks for groups of other scavengers and uses their size to scare them off the carcass. They can eat over 1 kg of food at a time and then go for days without eating anything.

California condors lay their eggs in caves, rock crevices, or large trees (like redwoods or sequoias). They do not build nests but instead just lay the egg directly on the floor of the cave, cavity or tree hollow. They sometimes move rocks around with their beak to improve the nesting site. Living an average of 60 years, California condors are slow to mature and reproduce. At 6-8 years old, they start to breed.

A male condor will perform ritualized displays to attract a mate. The skin on his head may turn an intense red-pink color during courtship. Once bonded, condor pairs perform acrobatic flights together. The pair will stay together throughout the years unless one is lost or they are unsuccessful in breeding.

Every two years, the female will lay just one egg. If it is removed, she can lay a replacement egg a month later. The male and female bird shares in the responsibility of rearing the young. They alternate in incubating the egg for a few days at a time. Once the chick hatches, they take turns feeding it (by regurgitation) and warming it. At 5-6 months, the fledgling practices flying, and by two years, the juvenile is ready to forage on its own.