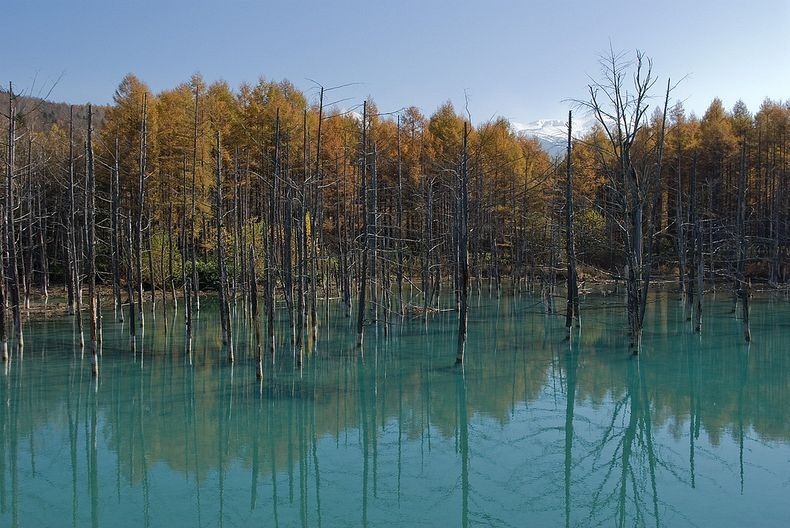 The beautiful Blue Pond situated on the left bank of River Bieigawa nearby the town of Biei in Hokkaido Island, Japan. It is not a natural formation. Actually, the artificial pond was formed when a dam was constructing to keep the area from mudflows due to its proximity to a volcano on Mt. Tokachi.

The local officials decided to build a dam upstream along the river.  When the volcano erupted in December 1988. All the water blocked by this dam gets collected in a depression in the forest, formed the pond. The blue pond is the famous tourist resort in Biei, Hokkaido, Japan. It is actually a place where myriad tourists gather in spring, summer, and autumn. Therefore, since this Blue Pond freezes in winter, nobody is theirs during that period.

The Blue Pond is remarkably blue that also the barren tree stumps that protrude from the surface of the water. The color of this lovely pond is hard remains constant, keep varying on seasonal based. The changes depending on what angle you look at it from and even at different times of the day.

In a distinguish light, it seems electric blue and green with no real scientific explanation. The Blue pond phenomenon actually attributes to a high concentration of aluminum hydroxide in the water. The obviously occurring mineral is famous to reflect the shorter wavelength blue light, just like the earth’s atmosphere does.

The water itself is colorless. The pond gets it’s name from the extraordinarily bright blue hue of it’s water. The trees stump protruding from the surface of the water, not unlike Lake Kaindy. The Pond has an ethereal and enchanting appearance.

The attractive town of Biei has been a widespread tourist destination for years. However, the Blue Pond became a global magnetism. When Apple included an image of the aquamarine pond in the recently released OS X Mountain Lion. 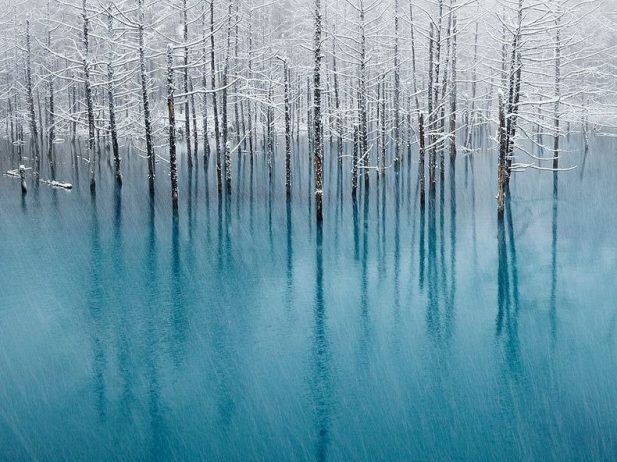 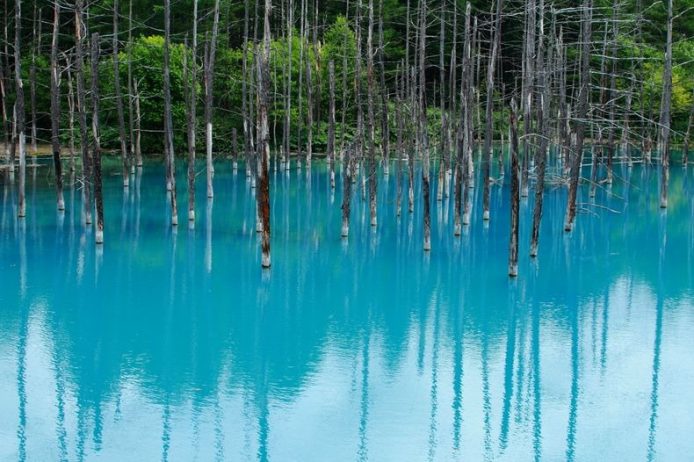 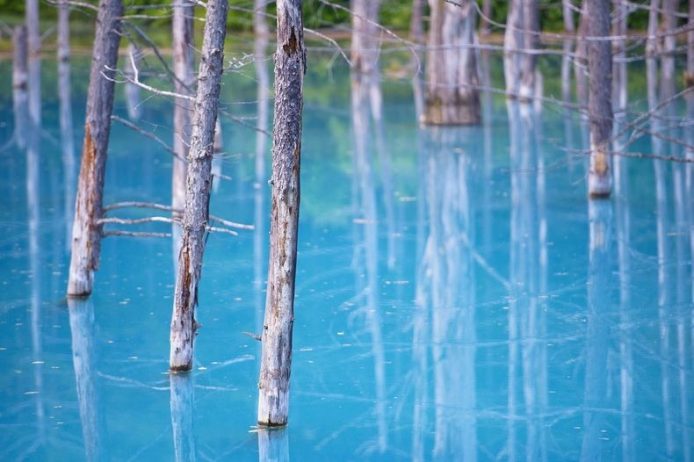 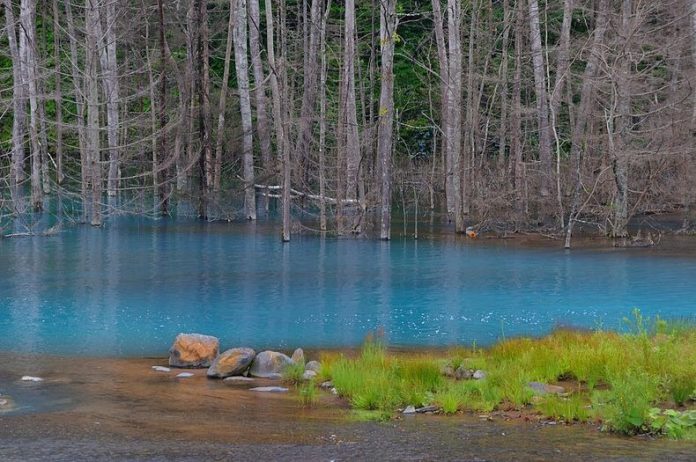 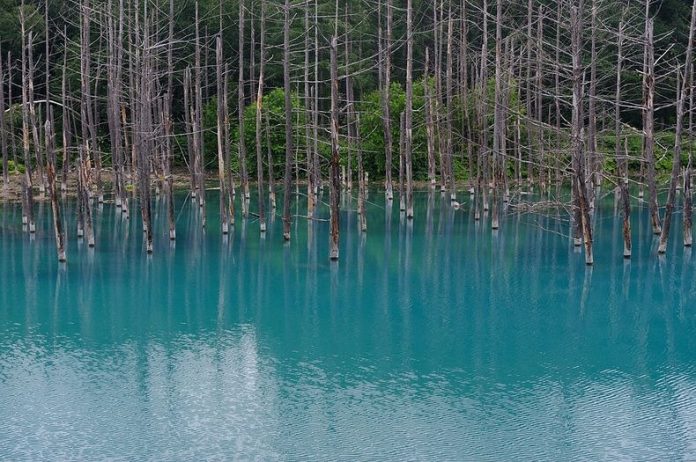 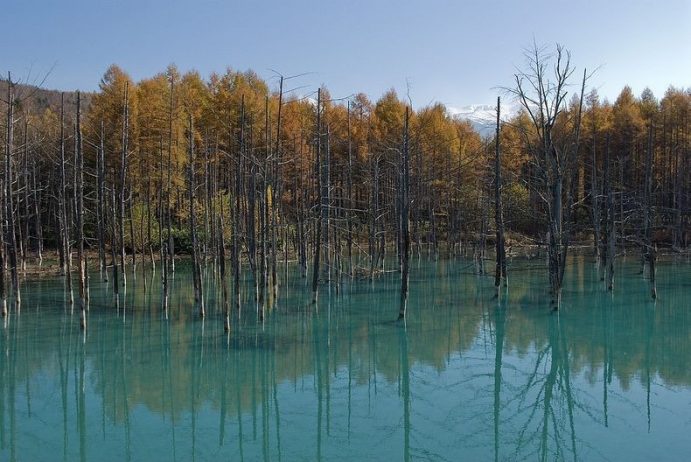 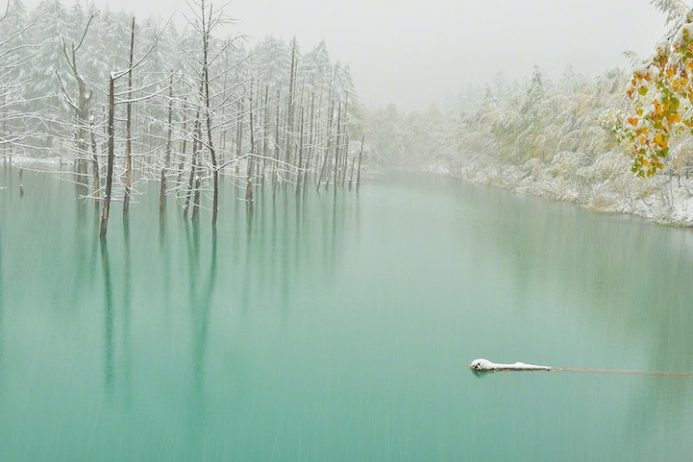