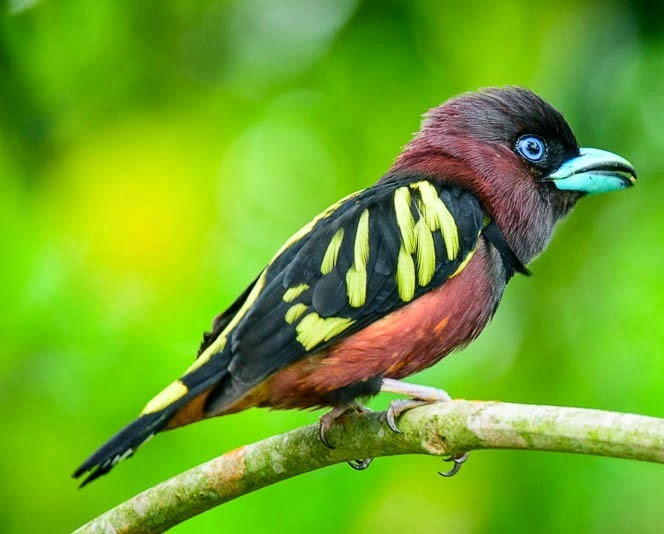 The banded broadbill is a species of bird in the Eurylaimidae family. The banded broadbill “Eurylaimus javanicus”It is found in Brunei, Cambodia, Indonesia, Laos, Malaysia, Myanmar, Singapore, Thailand, and Vietnam. The bird’s natural habitat is subtropical or tropical moist lowland forests. The species is a husky, forest-dwelling bird with a large head and a wide bill is atoned in purplish, black and yellow hues.

It has a large purplish-black band across its chest, bluish-grey eyes have various yellow spots on its wings and some yellow on its rump. The birds prefer swamp forest, evergreen and mixed deciduous forest near rivers and streams on plantations, in gardens and parks, and around villages.

The bird’s voice is a typical song a far-carrying, brief, sharp “
Advertisement
wheeoo” continuing with a long, ascending trill that may last up to five seconds. The Banded Broadbill is alike to the Black-and-yellow Broadbill, except that it is mostly atoned in black and peach, not purple.

The species is evaluated as least concern because it has an extremely large range, hence does not approach the thresholds for Vulnerable under the range size criterion.  This species may be rarely targeted for the cagebird trade, some forest loss within it’s an altitudinal range, especially around Carita, and including at the lower edges of protected areas. The bird naturally sits motionlessly in the trees, in small groups or pairs and scan for moving prey. When they spot something, habitually in the foliage, they fly out to grab it.

Source: Wikipedia ! All Birds of the World