In the Death Valley, there is an endorheic basin called Badwater Basin, the lowest point in North American with a depth of 282feet below sea level. The Badwater basin comprises of the small spring-fed pool next to the road in a sink, accumulated salts of the surrounding basin make it undrinkable, thus giving it the name. The pool site itself does have animal and plant life, including pickleweed, aquatic insects, and the Badwater snail.

The area which closes to Badwater basin, where water is not always present at the surface, repeated freeze-thaw, and evaporation cycles slowly push the thin salt crust into hexagonal honeycomb shapes. This is a popular site for tourists are the sign marking “sea level” on the cliff above the Badwater Basin. Badwater never dries out totally, and even manages to support a unique species of fish – the Death Valley pupfish, a small bluish creature which has evolved to survive in the hot saline conditions.  The salt pools, several routes towards the mouth of the valley, before sinking into the sand.

Moreover, the pool is not the lowest point of the basin; it is actually several miles to the west and varies in a position subject to rainfall and evaporation patterns. The salt flats are hazardous to traverse to the sign marking the low point is at the pool instead. The area has extreme temperatures most of the year, but the humidity from the evaporation of salty water makes all movements more difficult than usual. The shade temperature crosses above 120°F, stands for a while really unforgettable in stifling heat. Be careful when you are walking as some of it can be brittle and break. As soon as you get the large concentration of salt, you can start to see the individual crystals that form with the life cycle of rain and evaporation.
Advertisement

At Badwater Basin, significant rainstorms flood the valley bottom periodically, well covering the salt pan with a thin sheet of standing water. This is the greatest evaporation potential in the United States, meaning that a 12 feet lake could dry up in a single year. When the basin is flooded, some of the salt is dissolved; it is redeposited as clean crystals when the water evaporates.

Further low points aren’t usually popular tourist sites, but when you get to claim to be the lowest point in in the United States, it doesn’t matter if you are depressed or just a geography nut, it’s a site to see. So, no trip to Death Valley would be complete without a stop at the lowest point of Badwater Basin, right in the heart of the Death Valley National Park. Read More – Mount Tongariro – New Zealand Volcanic Zone 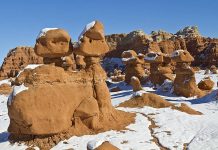 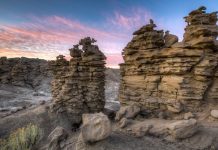 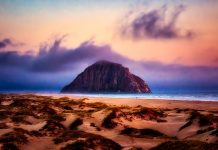