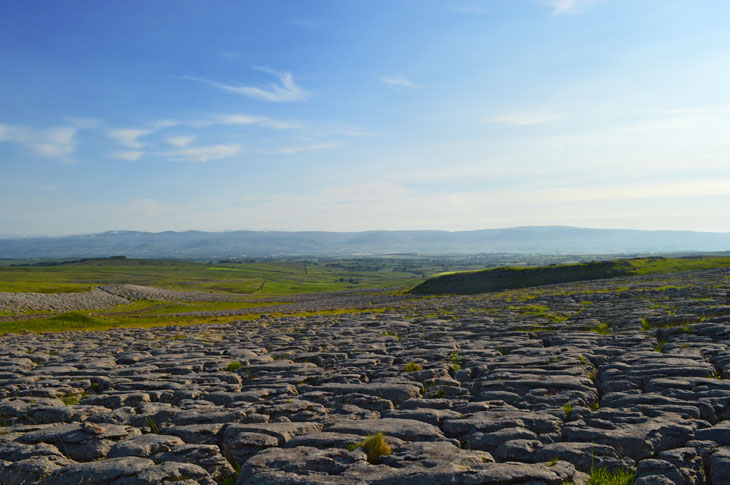 The Orton Fells, located to the east of Lake District, in Cumbria County, in England. This is an area of amazing geology, bounded by the small villages of Orton, Great Asby, Little Asby, Crosby Ravensworth and Crosby Garret. This area contains some of the most captivating limestone outcrops, scars and pavements in Great Britain.

The amazing limestone pavements are areas of flat, uncovered and weathered limestone rock surfaces. However, abrasion by glaciers as well as natural weathering of the limestone has formed deep fissures, which has broken the pavement into blocks that seems as if they were sculpted by human hands.

Therefore, most of the pavements were damaged by mining over the centuries. The Great Asby Scar, near the village of Great Asby, and Orton Scars, near Orton, comprise some of the best enduring examples in Britain. The limestone rocks in these pavements were created during the Carboniferous era some 350 million years ago.

In the ancient times, this region was under the sea, hence walking across the limestone pavement you can still find fossils of the ancient corals, shelly creatures and sea lilies from which the rock is made.

This is the most extensive area of pavements in the UK outside the Ingleborough area in Yorkshire.  Most of the landscape is protected by both Site of Special Scientific Interest and candidate, and it is Special area of Conservation designations because of its international importance.
Advertisement

Moreover, during the last ice age, the limestone was enclosed by an ice sheet several hundreds of meters thick that scarred the limestone bedrock. So, when the ice melted, it left sediment on top of the rock which was colonized by trees and plants as the weather conditions warmed.

Farther, water running through the soil found softness in the rocks that were then eroded away becoming deep fissures. The water also left channels and hollows in the rock, which were bare as the soil was washed away over thousands of years.

Thus, these runnels and pits now make up the lovely and complex patterns that can be seen on the Orton Fells pavements. The deep fissures are home to a number of plants and ferns where they remain protected from grazing animals and the drying effect of the wind. Moreover, many invertebrates, including spiders also use the fissures of the limestone pavement to string there webs across to catch insects.

The birdlife found on the Orton Fells is typical of upland pastureland.  Meadow pipits and wheatears breed on the grassland surrounding the pavements with wrens actually nesting among the limestone outcrops.  Thus, buzzards, ravens, and kestrels are seen often, as are curlews, golden plover and lapwings.

Moreover, skylarks can be heard singing during the spring and summer months. There are few mammals found on the pavement.  Rabbits are the only animals you are likely to see during the day, but foxes, stoats, and moles are all known to use the area. The pavements are home to many invertebrates, including spiders that use the grikes of the limestone pavement to string there webs across to catch insects. Also Read: The Wilderness of Bisti Badlands