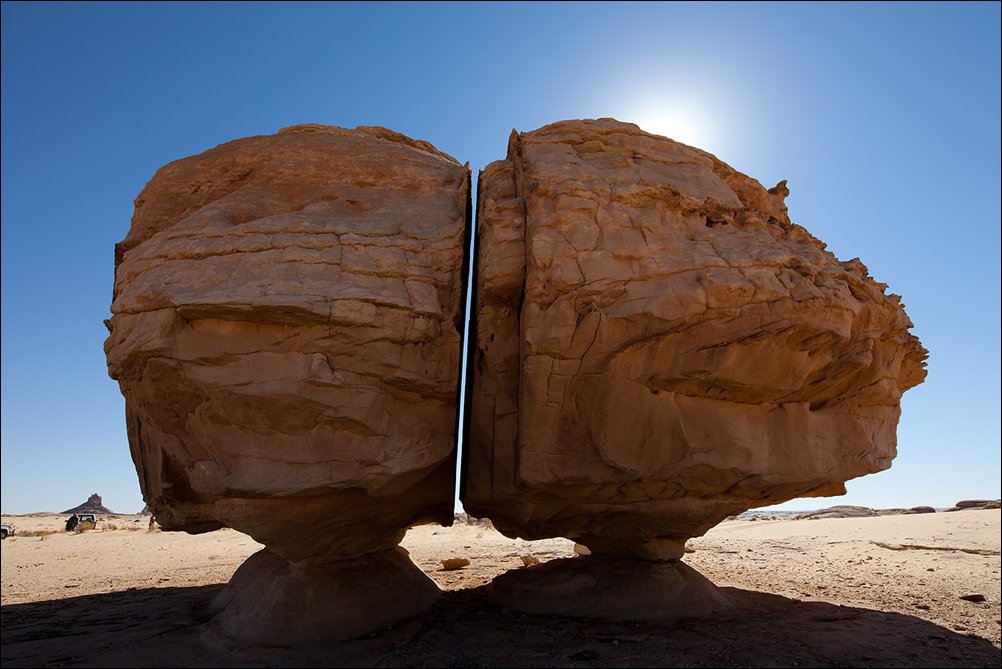 You’d have seen many rock formations on internet. The Al Naslaa Rock formation may puzzle you to see two standing stones and flat faces are completely in natural shape. A perfect slit between rocks seems a machine work, but it is amazing natural. Al Naslaa Rock is located in Tayma oasis, Saudi Arabia. The archaeologist believes Tayma has been inhabited from ancient times.

“The standing stone of Al-Naslaa truly are a big mystery”.

Two stones split in half have created confusion among experts ever since their discovery. Al Naslaa Rock is most photogenic petroglyphs in Tayma about an eight-hour drive out of Riyadh. The small pedestals have given added support to boulders. So, archaeologist not sure how rock formation remains balanced here? How did the rock cut in the middle? The fascinating megalith stones were split in half with look like a LASER precision.

Take a deep breath and believe the locals of Arabian Rock Art Heritage site when they tell you it’s a naturally occurring phenomenon, though we have no idea how it came to be. Perhaps the ground shifted somewhat underneath one of the two supports and the rock split.

It could also be from of volcanic dike of some weaker mineral that solidified there before everything was exhumed. Or, it could be an old pressure crack you see a parallel crack just to the right of it that has been pushed/pulled apart some.

Also it could be an old minor fault line, since fault motion often creates a zone of weakened rock that erodes relatively easier than the surrounding rock. It all recommends that at some point it must have been worked on by very precise tools, some have even ventured out and said laser-like tools.

Many legends said, it is one of the greatest mysteries found by man. The incredible ancient stone structure entices thousands of tourists each year who come to Al-Naslaa. And observe its perfection and balance, which has given rise to myriad theories that try to explain its origin. Also Read: The Wonderful Kopjes of Serengeti