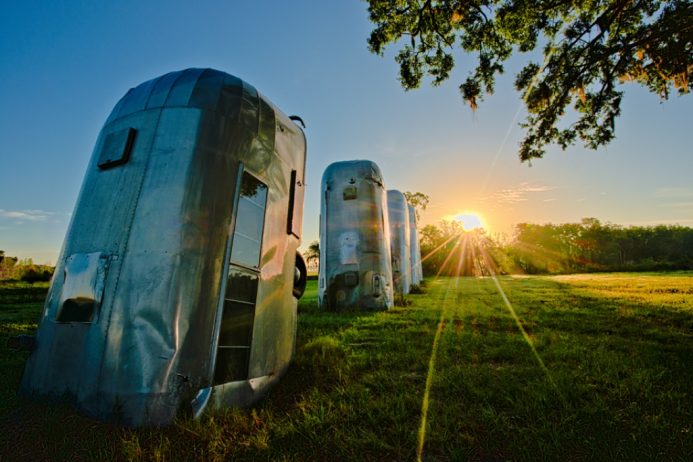 Well, depending on whom you ask, Airstream Ranch might seem like a real trash heap, somewhat than a work of art, but seeing it as thus is missing the point completely. It is constructed in 2008; Frank Bates “the owner of a nearby RV dealership” work of art is an ingenious homage to America’s motor past. Though 8 Airstream mobile homes, shoved into the Florida sod as an artistic tribute.

It is admired by everyone, super idea for recycling old mobile trailers. The magnificent roadside art installation recognized as the Airstream Ranch has caused double-takes along I-4 between Tampa and Orlando. Since 2008 despite local lawmakers lobbying to have the shiny trailer parade put out to pasture.
Advertisement

Thousands of people visit the wonderful attraction each year to marvel at the odd automobiles, but not everyone is so pleased. Frank Bates envisioned Airstream Ranch as a tribute to the iconic company’s 75th anniversary. It is inspired by the similar Cadillac Ranch installation in Amarillo, Texas which comprises of a row of the classic cars sticking out of the ground in the same fashion.

Well, Bates was in trouble, when some of neighbors viewed the installation as an irritation, attracting countless unwanted visitors, and just usually being an eyesore. Therefore after complaining to the county officials, the haters were able to get a recurring fine levied on the Bates’ trailers.

Though after taking the matter to court it was decided that the Airstream Ranch will remains stay and the Bates’ will have no longer had to pay any fines. America does not have as several iconic standing stones as much of the rest of the world. Which are home to such ancient wonders as the heads of Easter Island and Stonehenge. But our collection of standing car formations is becoming a beloved tradition in its own right. 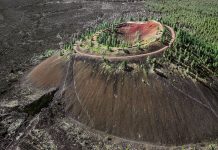 Lava Butte – A Cinder Cone That Volcanoes Can Cause